Scottish Gaelic and Russian motto of the Varangian Guards.

One thing is clear: within the Human Sphere, the Ariadnans are a different breed. A life of deprivation on a hostile world forges a unique character that makes them capable of withstanding the worst of adversity. People like them do not fit into more civilized environments, but they thrive in border territories, disaster areas, or in war-torn regions. And believe it or not, the Human Sphere still has plenty of those. This is why the Paradiso Coordinated Command welcomed the AEC, the Ariadnan Expeditionary Corps, with open arms. However, in that first AEC contingent that ventured out into the Human Sphere, the Caledonian representation was very small due to this people’s particularly isolationist character. Only the outcasts, those with weaker bonds to their clans, or those assigned to Ariadnan joint units headed to Paradiso, to kill or die on a faraway planet against an alien foe.

Among them was Sergeant Major William McKellar, who realized the opportunities this service abroad offered to many Ariadnans. If Ariadna is a hard planet to live on, isolated Caledonia, with its rigid clan society, or the fearsome Tartary, always besieged by Antipodes, are even more so. McKellar knew that, however hard the service was, however dangerous the operations were, for any Ariadnan of a lower social class who has spent his or her childhood in that godforsaken land, there are no bad days. Nothing can be worse than what they have endured in their homeland. And that was precisely the kind of people who were in high demand outside planet Dawn, even if it was in the most dreadful corners of the Human Sphere, which could never be as bad as Caledonia or Tartary. Hence, when he went back home after having served in the first AEC contingent, McKellar created the Varangian Guard, a mercenary unit made up of all those Ariadnans willing to leave behind the misery they lived in, even if that meant relinquishing their homes and their clans. Many of his recruits have soldiering experience, while others only have experience killing for their clans or for criminal groups—two terms that are indistinguishable from one another in the remotest areas of Ariadna—but all of them are given thorough training to adapt to the military techniques and protocols of the Human Sphere.

And this is because McKellar was perfectly aware that, no matter how high the demand for unstoppable savages might be, they need to be able to fit in at least just enough not to scare away their potential customers. And thus, with a combination of professionalism and savagery, is how the Varangians have made a place for themselves among the elite mercenaries of the Human Sphere. Because even though they wear uniforms and carry more modern weapons than any of their fellow countrymen, the Varangians remain crazed Ariadnans who fear nothing.[1] They are damned berserkers who will jump headfirst into a ravine to chase the enemy, just as they will rush relentlessly into a dark room full of adversaries, or start climbing a tree because they have seen some movement in the woods that might be a bear they can hunt with their axes to have fresh meat for dinner.

After a decade of service, they shine at the front as much as they make a mess at the rear, the Varangians drew the attention of Bureau Athena, which put forward an inclusive program for Bureau Aegis, hiring this unit as operational reinforcement and an enticement to improve O-12’s image in Ariadna. However, apart from the fact that McKellar’s Varangians’s behavior in the rearguard has caused Bureau Aegis some problems with local populations, SWORDFOR knows that sometimes the tactic that works best is a good bludgeon and an ugly smile—and that is what the Varangians are best at.[2]

Tactics: The Varangian Guard fight with military-style tactics blended with ferocity and stubbornness. They coordinate well with regular militaries, and they are often used to supplement their numbers. They are mostly indistinguishable from a regular army unit, except by their unit patches and colourful tartans.

Typical deployment: As a frontline combat unit, the Varangian Guard often deploy in their entirety, or in small, specialised fireteams.

The Varangian Guard are a premier unit renowned for their ferocity and fearlessness. Unapologetically Ariadnan, the unit recruits almost exclusively from disaffected Caledonians seeking escape the frontier politics of their homeland.

After a tour of Paradiso, the Varangian Guard’s commander, William McKellar, realised the opportunities available to those willing to leave Dawn behind and immediately set to gathering like-minded Caledonians. The unit’s fearsome reputation has risen exponentially ever since. As one of the most famous veterans of the Ariadnan Expeditionary Corps, William McKellar has proven he is a savvy individual. He understands that the savage frontiers of Dawn shape some of the toughest specimens of humanity seen anywhere in the Human Sphere. Forging those recruits in the jungles of Paradiso and other hotspots across the G5 nations provide them with the skills and experience the unit so crucially needs to be competitive. The Varangian Guard provide tough-as-nails frontline support in hostile territories and combat zones. They regularly contract out to Bureau Aegis, both on Paradiso and elsewhere. Their recruiters can often be found on the Ariadnan frontier, where they engage with unsettled Caledonians, antipodes, and opportunistic representatives from elsewhere in the Human Sphere alike.

The Varangian Guard maintain a loose military chain of command. Compared with other mercenary units, this results in a degree of structural and strategic flexibility that suits their fierce nature. Though individual fireteams can often find themselves spread thin, they more than compensate for this with their combat effectiveness and ferocity. Most Varangian fireteams are built around a tough core of veteran soldiers accustomed to fighting in alien environments. The Varangian Guard aren’t going to panic when the situation deteriorates, and they can keep it together in chaotic and rapidly-evolving conflicts.

The strength of the Varangian Guard is its soldiers, not its equipment. As with the Ariadnan Army, they prefer rugged tools that can be easily maintained in the field. They rely on other organisations for interstellar transport: O-12, when contracted to Bureau Aegis, or the Freetrade Brotherhood. Nevertheless, William McKellar is interested in modern weapons and materiel for the Varangian Guard. He always has an eye open for military surplus that he can purchase, and rumour has it that he instructs his senior officers to turn a blind eye to any equipment that recruits “liberate” when they sign on.

The Varangian Guard recruits primarily from Dawn. This reflects William McKellar’s personal goal: rescuing the youth of Caledonia from Dawn’s harsh frontier to furnish them with off-world experience and technological expertise. He offers them the chance to pull themselves out of the mire and take control of their own destinies. The clans don’t necessarily like the fact that William is stealing their youth from under their very noses, but he simply answers this with ‘That’s their problem’. Varangian recruitment officers also tour the Ariadnan outposts on Paradiso. Virtually every member of the Ariadnan Expeditionary Corps who shows some promise will be approached as their tour draws to a close. Recruiters receive a commission to supplement their pay for each Ariadnan they recruit who serves out at least a year in the Varangian Guard. These recruiters are typically also combat veterans—who better to assess the suitability of future candidates and entice them to sign? This latter tactic effectively outsources Varangian Guard training to O-12, which not only saves money but also has the benefit of introducing the Ariadnans to modern military strategy, tactics, and hardware.

Bitter Lake was a small settlement on the Norstralia continent of Paradiso, a short distance from Ishmailiyya. Situated on a lake at the bottom of picturesque waterfalls, it housed an all-important ALEPH node. During the early stages of the Second Paradiso Offensive, before Paradiso Coordinated Command had a good handle on the size of the Combined Army assaults, two fireteams from the Varangian Guard were sent to bolster AEC forces defending the fledgling settlement. When the true extent of the Combined Army attack on Ishmailiyya became clear, the ALEPH node was remotely bricked. The Varangian Guard were unaware—they had lost their only Wardriver in the first day’s fighting and were out on the perimeter amongst the worst of the fighting. Worse, they never received the order to abandon Bitter Lake. The entire Varangian contingent was assumed lost. A few weeks later, a routine air patrol over the region spotted a signal flare. To their surprise, the Varangian Guard were still holding out. They’d lost almost two-thirds of their number, but the settlement and its now-useless ALEPH node were still secure.[3]

The Brothers Koposov, last survivors of a Varangian unit assigned to Paradiso. 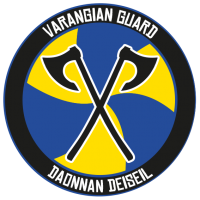 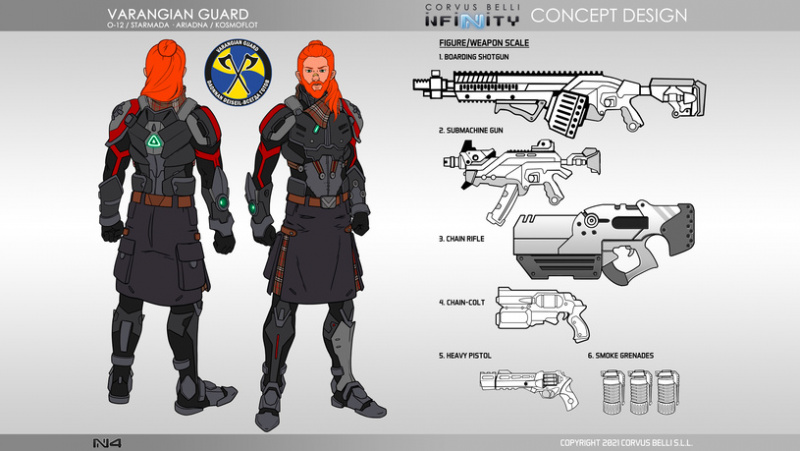 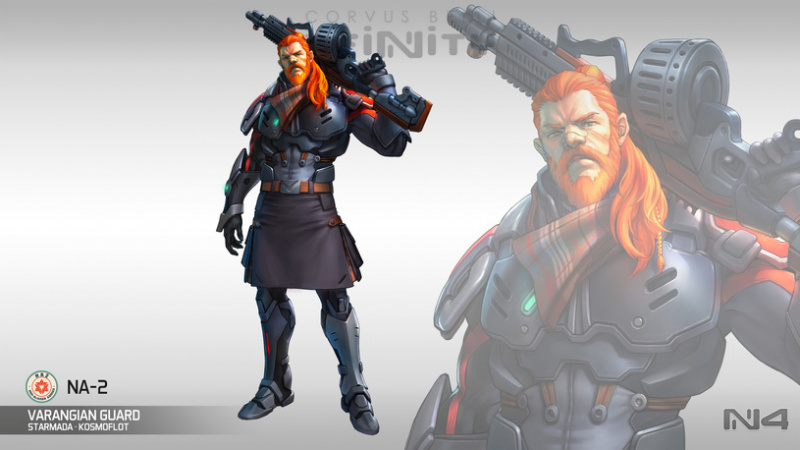 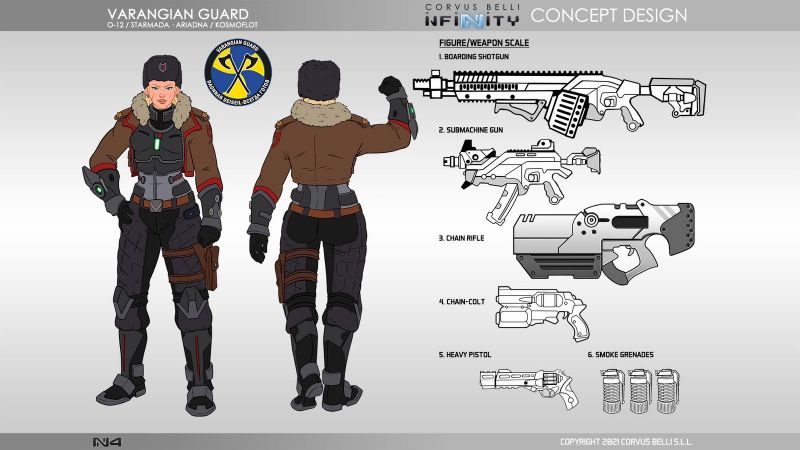 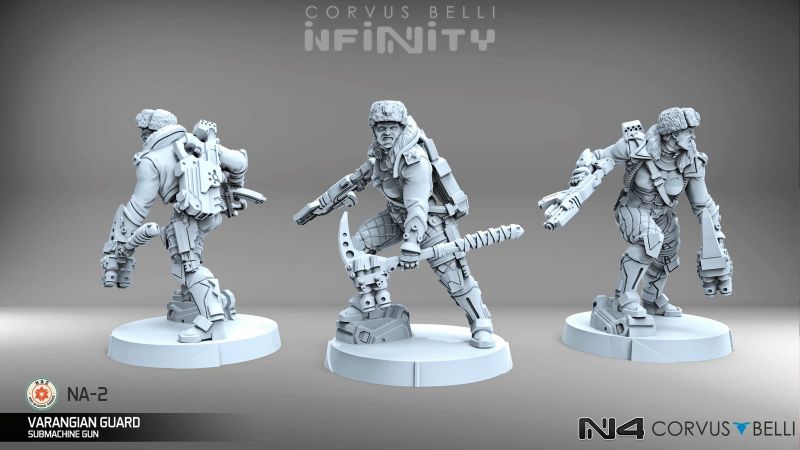 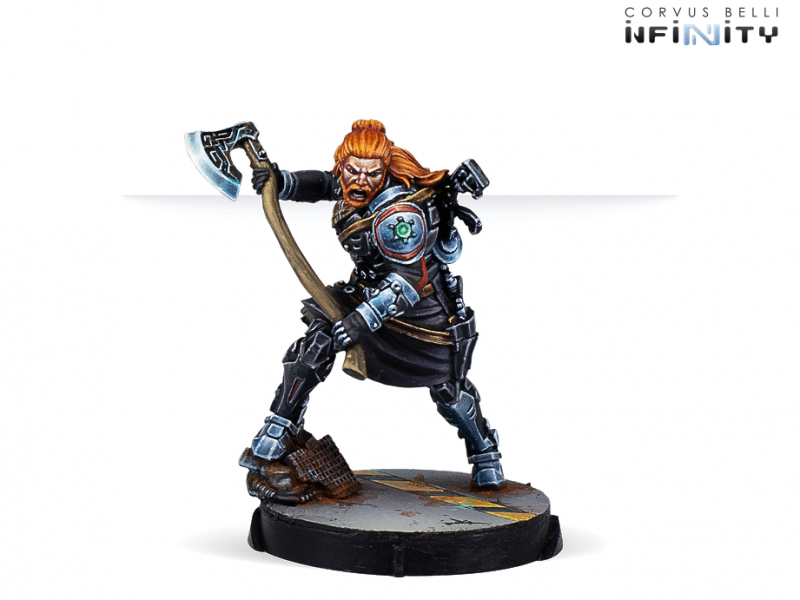 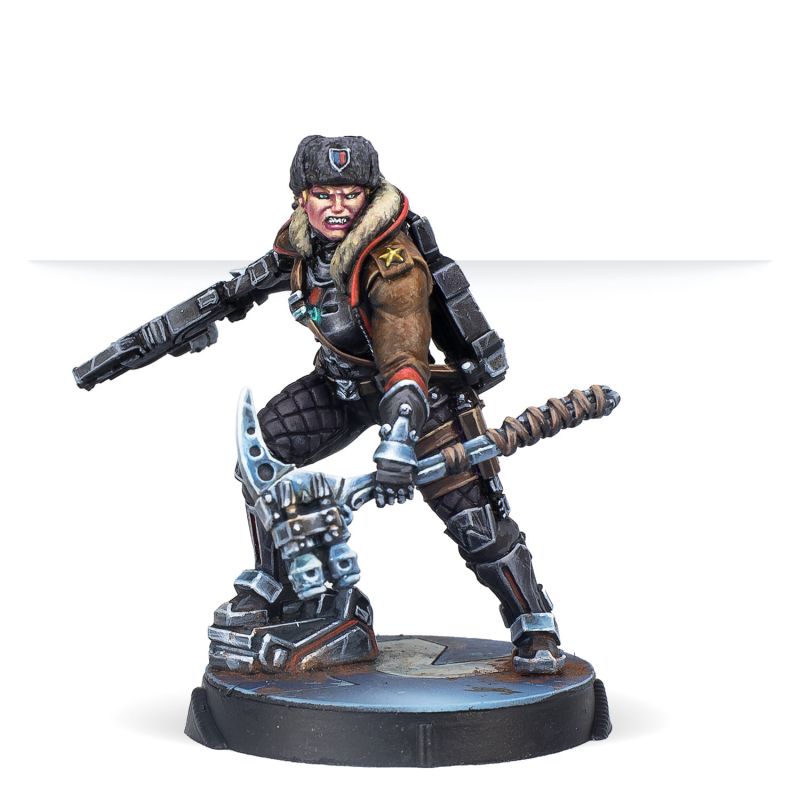