Captain Uma Sørensen is silent, lethal and reliable like every PanOceanian weapon.

“There’s no bond stronger than that of blood,” Uma Sørensen’s father always said. Family and blood were paramount to Peer Sørensen; he wasn’t the leader of a NKAH cell (Nordiske Krigere ave Heimdall, or Nordic Warriors of Heimdall, a radical ultra-nationalist group from Svalarheima that defends PanOceania’s moral and racial superiority) for nothing. Uma and her little sister Tara were raised hearing those ideas, repeated ad nauseam both in their home and in the paramilitary encampments the group has on the frozen plains of Trollhättan, where their members prepare to defend their ideology through force of arms if needs be. They both spent more time in those camps than they would have liked, getting ready for a supposed confrontation against the whole Human Sphere that their father thought inevitable. And, though they always hated it, both the ideas and the Spartan and combative regime they were subjected to ended up making the words “the apple doesn’t fall far from the tree” true. Thus, as soon as they were old enough to leave their father’s home, they both enlisted in the army, for fighting was what their father had taught them, and fighting is what they did best.

Yet while Tara wanted to get as far away as possible from her past, enrolling in the Navy and leaving the planet, her sister preferred to take advantage of the knowledge gained in those encampments. Uma enlisted in Svalarheima’s Winter Force, where the experience acquired on the frozen plains of Trollhättan catapulted her to the Svalarheiman Nisse regiment. There she would serve with distinction for many years until she was recruited by the Indigo units of the PanOceanian Special Operations Command. This assignment took her away from her planet and her past to perform missions all across the Sphere. Nonetheless, when it seemed that Uma had finally found her place, fate would shake her entire world.

During a patrol mission during the Intermediate Blockade of Paradiso, the POS 'Obsidian Spear of Taema', a frigate on which her sister served, was attacked and boarded by the Combined Army. Though the attack was repelled, the crew suffered many casualties and due to the extreme violence of the assault many crewmen were missing in action. Among them was artillery non-commissioned officer Tara Sørensen, whose body was never found.

This terrible news made Uma re-evaluate her career. Vengeance became the new driving force in her life, and—together with discovering her sister’s fate—the destruction of the Combined Army her main goal. To do so, Uma requested to be transferred to the Strategic Security Division, where she would serve together with the infamous Hexas as attached Indigo officer, in hopes of gaining more information on Tara’s whereabouts if she was alive, or at least of getting the chance to hit the Combined Army as hard as possible if she wasn’t.

Focused on this personal mission, Uma has become an officer as efficient as she is obsessive, always volunteering for any operation that can get her closer to her particular goals. The thing is that, although she doesn’t want to admit it, her father was right: blood bonds are the strongest and ones that Captain Uma Sørensen cannot escape. It is blood that binds her to her sister, and it is blood that this officer wants from the Combined Army.

“The trick is to disappear in the shadows before the shoting flash goes off.”[1] 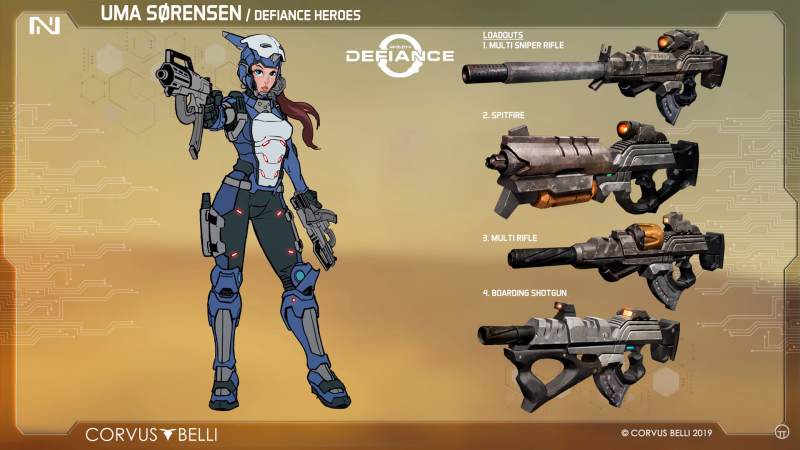 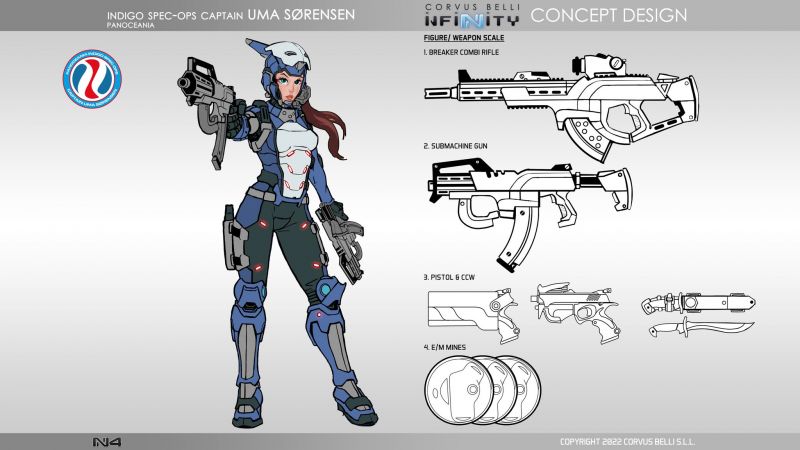 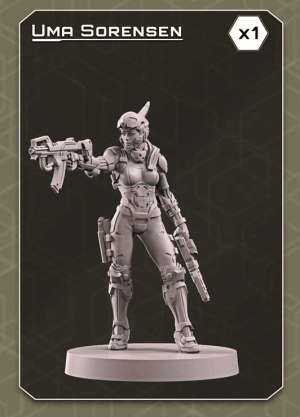 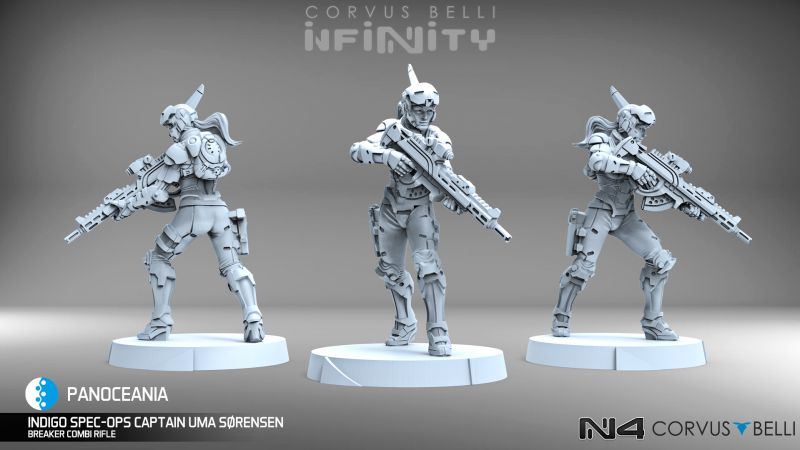 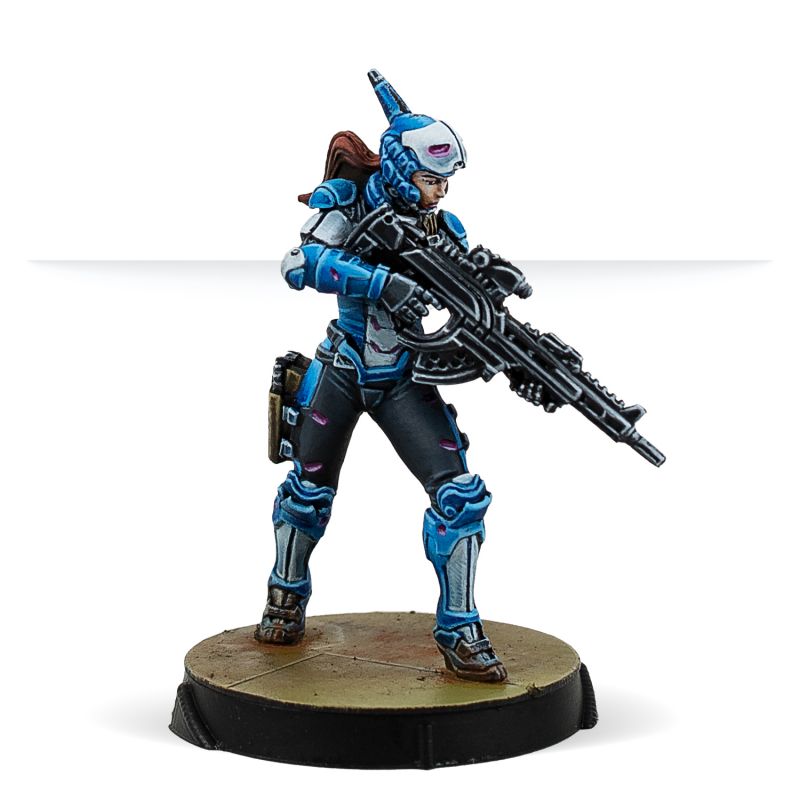 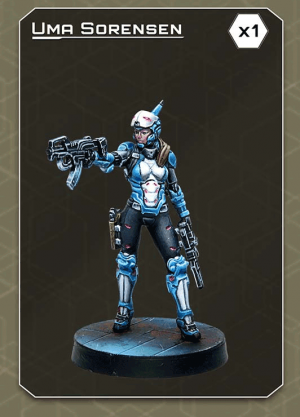 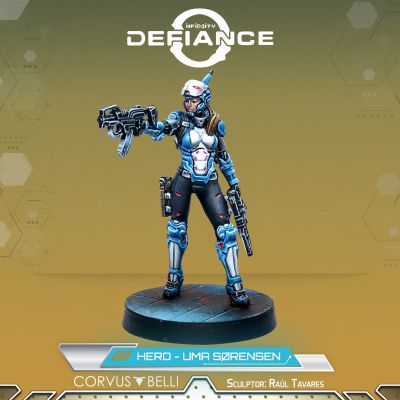 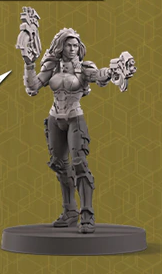 None at this time, though her Defiance models are not available through retail.