“Why do I like this? Because when I’m linked to a T.A.G. I become the lightning falling from the sky, the thunder that roars in the storm and I throw myself into action. which is where I look prettiest” Excerpt from an interview with the military news channel Parabellum by Lieutenant Macayana, only in Maya.

Toni Macayana is a star. Even when she was a child, young Toni knew she wanted to be a pilot. When she failed to pass the tests for the Navy, she tried out for the Armoured Cavalry. As soon as she left the Academy, second lieutenant Macayana asked for assignment to her cultural regiment, the “Tikbalang” Chasseurs of Acontecimento. There she received a very battered T.A.G., a veteran of the NeoColonial Wars with almost a decade of service behind it. To Toni’s frustration, the interface software was full of bad habits from its former pilots, preventing her from making full use of her abilities. In her next rotation. the Tikbalangs were sent to Paradiso and soon, Toni had her first combat posting. She made a name for herself in battle by undertaking daring and risky actions, but her aim was not courage or glory, but to have her T.A.G. thrashed to pieces and therefore get a new one. After the Horselberg Withdrawal, a maneuver covered by the Tikbalangs, Toni’s battered T.A.G. was finally retired. While she waited to get a new machine from the factory, Toni decided to renew her team’s personnel. The chief Machinist assigned to her section wanted to take retirement, so Toni found a young Machinist willing to work and who liked to experiment. Sergeant Caetano is the typical technician who spends all night, every night, testing systems. He was eager to try different combinations of interface software and a new kind of anchorage for the ceramic coating layers. Exactly the person Toni needed, as she had a lot of work ahead to adapt her new T.A.G. to her personal style. Taking advantage of the fame she had acquired during the campaign, she asked for Caetano to be attached to her section as chief Machinist. The next step was to find a Trauma-Doc who really cared about improving the metabolic output of their pilots. In Doctor Kalapandri Toni found the last element of the team she needed to become the best PanOceanian T.A.G. pilot.

From there on, honour awards flowed onto her record constantly. The long campaign helped her to polish her talent, with an outstanding display in the T.A.G. battle of Catilina Valley. The greatest T.A.G. vs T.A.G. fight to ever take place on Paradiso, machines engaged in deadly point-blank duels or, when out of ammunition, fell upon each other in brutal melee combat. Toni left Paradiso with the rank of Lieutenant and well established as a famous figure inside the regiment. Slowly, Toni, Caetano and Kalapandri have been improving Eduardo, her pet name for her T.A.G., with new and experimental equipment. Eduardo is now much more than an armoured vehicle, not even just an extension of Toni, it “is” her own body, but improved - faster and more lethal. Lieutenant Macayana is considered by many people as the most effec tive pilot with the best qualifications in the PanOcenanian Armoured Cavalry. Her glacial calm during the most intense firefights and her gifted reflexes and intuition have allowed her to gain a place amongst the best of the best. However, if her military virtues are many, modesty is not one of them. Toni is the beautiful face of a good team, the vocalist, the star, the one who gets the applause. but also the one who risks her brain against traumatic shock and feedback, the one who will pay the price for the slightest human or technical mistake. Nevertheless, Toni doesn’t care about any of this, as she likes the sensation of the wind against armour that the interfaces transmit to her, and that’s something she wouldn’t change for anything in the world. As a summary of her personal philosophy, on her weapon’s barrel she has written “Let’s dance!”. Probably T.A.G.s will be the death of her one day, but for now, they are her life. 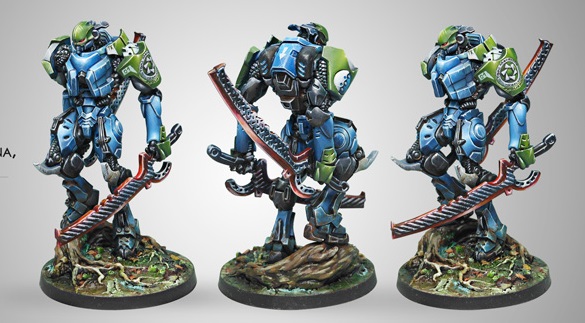