The elves dwelling in the magical forests of Lindwurm have decided to take action. Being aware of the dangers this new cycle of magic harbours, the Syënann don’t want to be mere witnesses of the coming events. Rather, they want to act. And even though they must face the difficulties of being away from their forests, they will do as necessary, come what may.[1]

The Sÿenann dwell in the magical forests spread through Lindwurm. They are not a declining nation. Quite the opposite, this new cycle of magic is making the forests thrive and rise powerfully.[2]

All elves are assigned to a Sÿena, a sacred tree to safeguard and tend to as a member of his community in No Return Forest. The emergence of the Fog brought forth a new threat to the borders of the Elvenwoods and the Syënann have chosen not to hide in their trees. They will hunt these new monsters themselves.[3]

For generations, the Sÿenann have remained faithful to a rigid code based on their traditions: the bond to a Sÿena tree which is assigned at birth, a horizontal organization of society in which everyone is equal, a commitment to training and to a warrior condition, common justice as imparted in the Great Forest, and having only as many possessions as they can carry.

If there's a distinguishing feature to this deadly warrior society is that no one is above anyone else in the Great Forest. For that reason, they have neither emperors, kings or princes. After the fall of Gae Assail, the Sÿenann learned that power in the hands of a few is a dangerous thing, for they might become corrupted to follow the Dark Doctrine. The Sÿenann accept and value all living beings within the Great Forest alike, without a care for their differences. Everyone is seen as the fruit of the same woods, they drink from the same waters, they obtain their nourishment from similar foods, and face identical dangers every single day in their quest for survival.

They're not a people in decline. After all, the Sÿenann fell back to the woods in order to live a peaceful life and they had to endure a severe decline in their population for centuries. But now that the Warcrow is growing once more on the skies, births have increased along with the emergence of new Sÿena trees, both in the Great Forest and on the outside world. The need to protect them has forced the elves out of the Great Forest to annex the lands in which they've sprouted, which has led to conflict with other nations who cannot understand this—in their eyes—whimsical behavior.

The Sÿenann inhabit the main forests of the world, which are often many hundreds of days away from each other. Regardless, despite the fact that the flora, the fauna, and the Sÿenann themselves are not the same in each forest, their customs and traditions remain consistent thanks to the Light Gates, which link the forests of the Nine Lineages, thus making them a single place. That is why for a Sÿenann there's just a single Great Forest and a single people.

The Sÿenann have always procured to live in harmony with their environment, refraining from interacting with other races as much as possible. But now everything has changed. The winds of change are blowing and they're no strangers to their effects. Pressure against the outskirts of the Great Forest increases with each passing day.

Feudom troops are encroaching upon the Elvenlands as they seek the unique properties of its trees to make weapons, while also fueled by their obsession with finding the relics of their Moon goddesses.

In addition, the Embersig Hegemony, an insatiably expansionist empire, craves to occupy the Great Forest and reveal the secrets of its thick and mysterious groves, undoubtedly driven by the Aestari Elves—deserters and traitors to their ancient race—that bolster their armies.

As for the Mounthaven dwarves, the Sÿenann know full well that they've always acted for their own benefit, concealing their ulterior motives with the sole purpose of profiting from other people's misfortune. In fact, they've started retrieving soil samples from certain areas in order to move forward with a plan as yet unknown. Furthermore, the Northern Tribes have returned to the continent from the Northlands with the intent of reasserting control over the lands they were expelled from centuries ago. And although no serious engagement has yet occurred between them and the Sÿenann, the latter has been making ready for it. They know it's only a matter of time.

As if all of this wasn't enough, the Great Forest, which had remained protected and unchanged in the face of the dreaded Fog that is threateningly poised to engulf Lindwurm, has begun to display gaps in areas such as No Return Forest. Sightings of deform creatures covered in pitch have also been reported in all of the nine areas of the Great Forest, an unambiguous sign that their defenses are becoming weakened, which has caused several skirmishes against the terrifying creatures that spawn from the Fog.

In recent times, this line of thought as been an echo in the Sÿenann's mind. It was the Fog, so far contained, that has forced the Sÿenann to react and defend their lands at all costs in face of the gaps that have exposed the more vulnerable parts of the Great Forest. The memory of that which hides in the Fog and the threat it poses is still fresh. The accumulation of enemies and threats has reached a point in which the Sÿenann are forced to act, honoring the spirit of their Radiant Elves ancestors.

Speech pronounced by Neakail, Grand Captain of Eadhar, before the Supreme Council meeting in Nemed (Maevhan). [4]

Elves have lived in the Great Forest for millennia. They first settled there during the expansionist campaign of the Elvish Empire of Gae Assail that would eventually conquer the entire known world around the Central Sea of Atllän Throughout the next two thousand years, the elves evolved as a civilization—prevailing over the neighboring peoples—thanks to their knowledge of magic, whose power increased as the Warcrow became ever closer.

After thousands of years of research and experimentation with magic, the elves discovered that its constant use would leave a residue on anyone who'd practice it. First, it started as a physical transformation, darkening and cracking their skin; if the use of magic continued, strange mutations and deformities would grow out of hand. The elves recorded the entire process, naming these uncontrollable manifestations as "Taint".

Moreover, the Taint would also affect the wizard's psyche, driving them to complete insanity sooner or later. Most of them would meet their end babbling about incongruous visions, while others would simply commit suicide.

The self-anointed Radiant Elves established limits for the appropriate use of magic, thus avoiding the Taint. This, however, wasn't enough to stop other elves in their ambition to attain the power of the ancient civilization that preceded them. They affirmed that the Taint was simply a way to ascend to godhood. The Radiant Elves considered them delusional, calling them Darkmind Elves and causing a schism that sowed the seeds of their undoing.

The tension between these two philosophies thoroughly divided elvish society in light of the largest Warcrow in recorded history. Darkmind Elves would gain followers with ease, eventually surpassing the Radiant Elves in number to the point that the Twin Emperors and their court adhered to the former's dogma. Henceforth, by imperial command, dissidents to the Dark Doctrine would be persecuted, branding Radiant Elves as rebels and causing elvish society to inevitably break apart as they plunged into a civil war that dragged the whole world's population.

After almost a decade of conflict, the unstoppable Imperial Troops seized Torraith, the second-largest city in the Empire and the main stronghold of the Radiant Elves, forcing them to withdraw deep into Maevhan Forest. Just as victory seemed within the Empire's grasp, Niamh—the most powerful of the Moura Elves—revealed herself to the Radiant Elves' army, showing them a way to turn the tide of the war. She warned them of the high price they'd have to pay if they submitted to a ritual that would grant them ultimate power: it'd allow them to win the war, but they'd also become victims of the Taint. The Radiant Elves accepted without hesitation, crossing the portal that linked Maevhan to the Island of Assail and fighting the most dramatic battle in Lindwurm's history, after which they claimed victory and restored peace to the world.

Once they returned to Maevhan Forest, Niamh led a moving ceremony for the survivors in which the spirits of those who fell in battle consumed by the Taint were received by the Sÿena trees of the Great Forest, which would be considered sacred ever since.

The Sÿenann culture and society has evolved around the sacred trees that hold the spirits of their forebears. The relentless and unwavering defense of their home goes beyond ecology and life in communion with nature. Each Sÿenann has a Sÿena tree assigned to them when they're born, of which they become fully responsible once they reach adulthood. This bond is eternal, even transcending life, for when a Sÿenann dies they're buried at the feet of their Sÿena, which will welcome their spirit in it.

Among all Sÿenann traditions, the harshest is the one that dictates that if a Sÿena dies, the elf to which it was bonded must abandon the Great Forest. Normally, the shame and dishonor the tree keeper feels make it unnecessary to force them out. Banishment is the worst of punishments since Sÿenann that wander away from the Forest for too long begin suffering withdrawal effects due to the dependency they have on the Great Forest. In the end, the Sÿenann are magical beings because they've spent millennia assimilating the magical properties of land that's been fully impregnated and imbued by magic. Without it, they end up becoming savage creatures, desperate and irrational; yet unrelenting, precise, and lethal as any elf.[5] 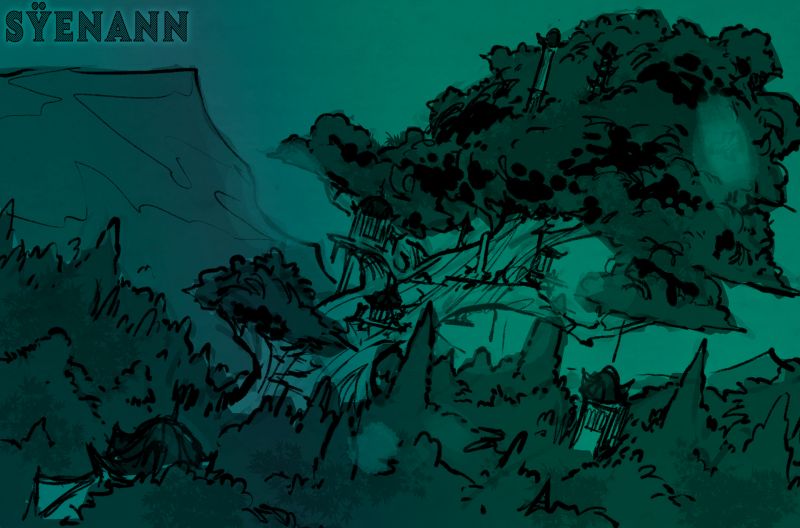 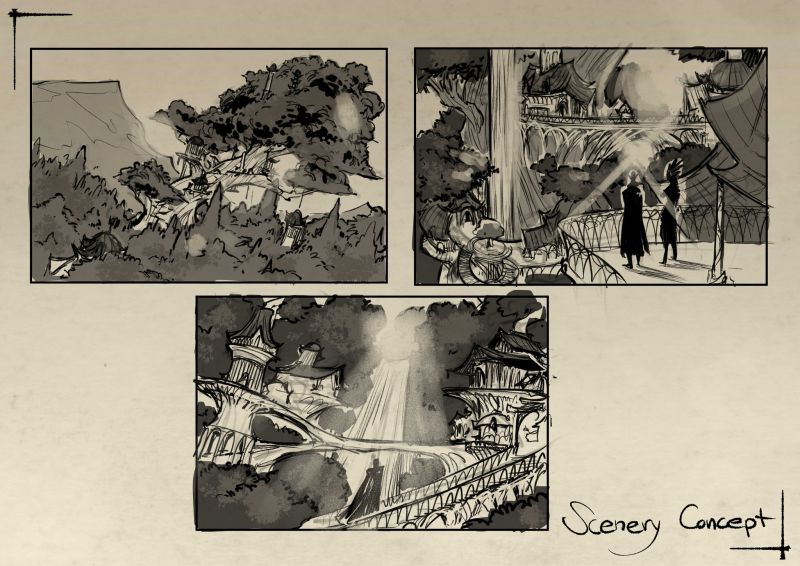 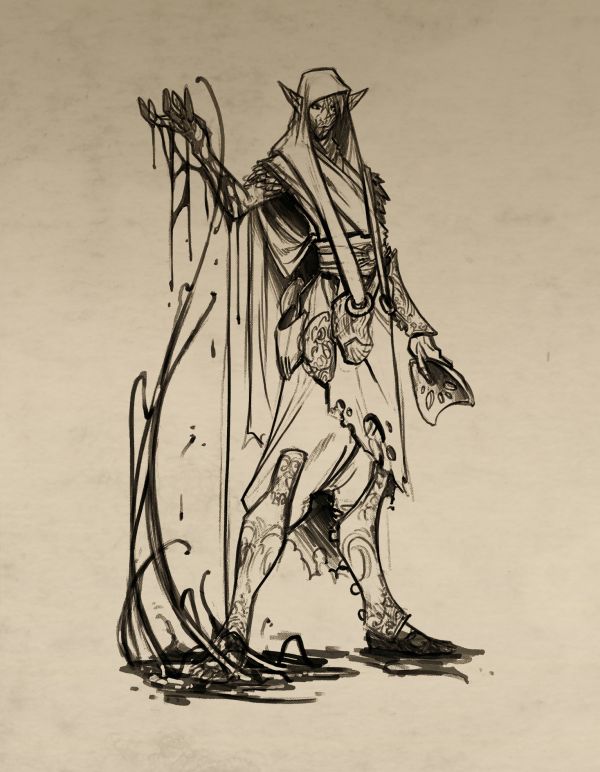 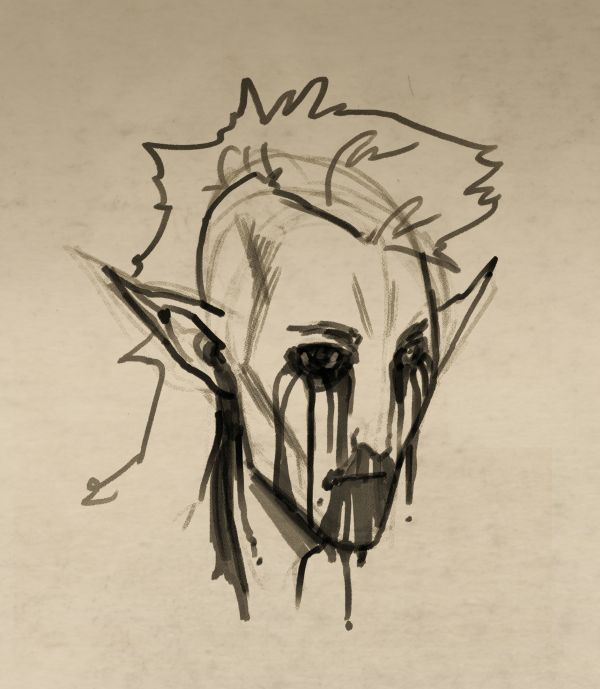 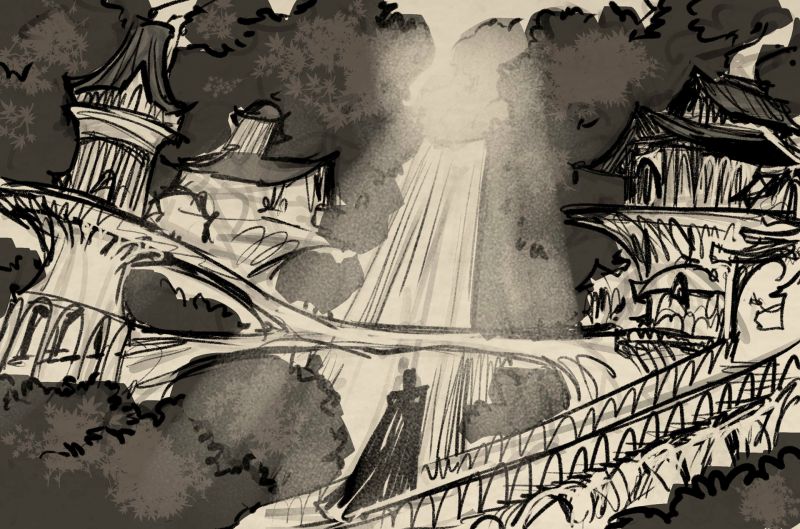 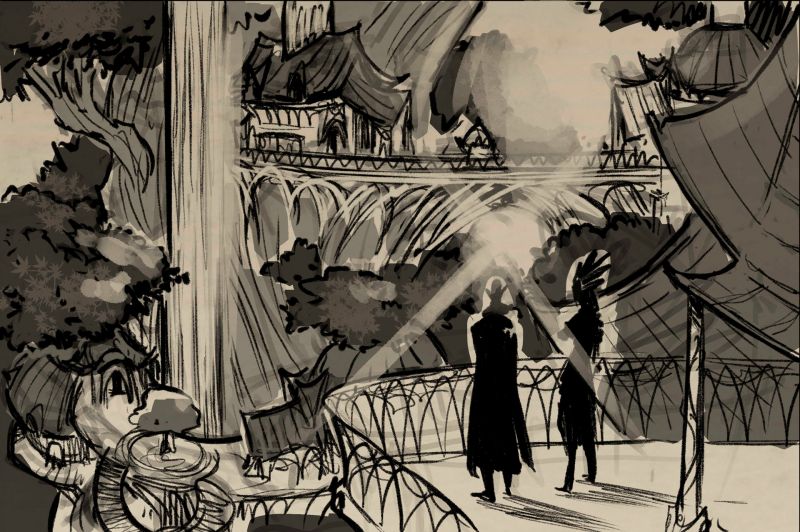 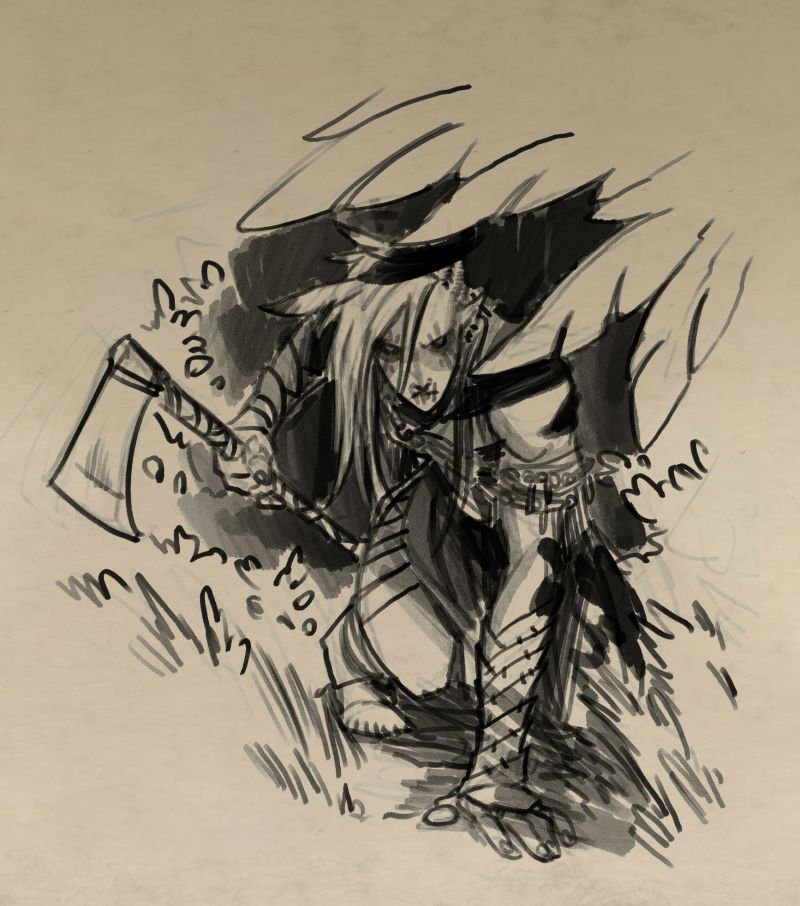 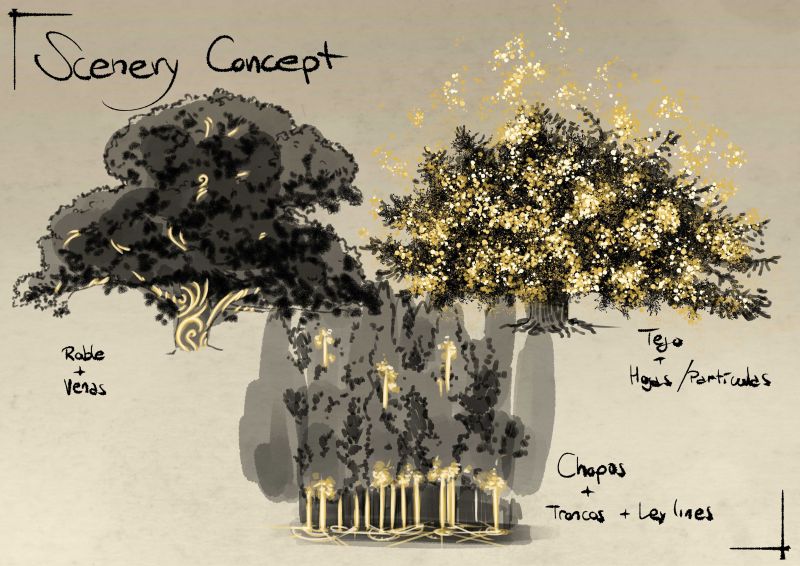