Knowing the difficulty of outpacing PanOceania in a direct confrontation, Yu Jing’s research investments stepped beyond the hardware created by the Karakuri project to create the Sù-Jiàn, breakthrough when it comes to REM technology. The Sù-Jiàn is a remotely controlled exoskeleton, able to morph its size and form to better adapt to battlefield conditions. The pilot is not just the driving force behind this exoskeleton, he is the exoskeleton. They feel the current flowing through the artificial limbs and the wind on their face as they rush on accelerated boosters toward enemy combatants, all without ever exposing themselves to the danger of the battlefield. Despite rumours that the Combined Army possess the means to eliminate REM and TAG pilots remotely, the profession remains a fairly popular choice made even more glamorous by the attention that Maya outlets provide to these ‘warriors of the quantronic age.’ Whatever the case may be, it all boils down to this—the Sù-Jiàn can outpace and outmanoeuvre more traditional TAG designs, is more robust and safer for the operator, and is a true jewel of Yu Jingese engineering[1]

The Sù-Jiàn Program, “The Swift Sword”, is the weapons system of the future. It goes beyond tactical exoskeletons and other concepts of modern war. It is a sure bet for progress. A jump into the future. The first step towards a war machine being a true extension of man’s will. The sublimation of the virtual warrior […]

[…] The Sù-Jiàn Program is the jewel in the crown of Yu Jing’s military industry. A Remote Presence Heavy Infantry with variable morphology. The key to its success is the integration of Remote Presence technology, the supposedly PanOceanian great achievement, into Yu Jing’s military specialty: its famous Heavy Infantry armor. Usually, servo-powered armors are slow and heavy, while what was sought was the opposite, nimbleness and mobility. To that end, instead of creating and developing hardware improvements, it was decided to remove the human operator.

After the achievements in terms of hardware from the Karakuri Project, it was necessary to go beyond them and create a precise interface able to reflect quickly and exactly the movements and intentions of its remote operator. The pilot had to become his own armor. For this purpose, it was vital that the remote interface allowed a direct connection with its operator. New neural connections had to be created that would work within the reduced space of a human sized exoskeleton.

Through the interface, a pilot feels the sensation of the exoskeleton getting ready for action. The energy concentrates in the limbs’ accumulators, while the entire system focuses on responding to new challenges, acquiring superhuman strength and agility. The interface also has an onboard tactical assistant, a computer built into the exoskeleton’s connection and control devices. This assistant remains constantly active, processing every situation and predicting future events; tracing trajectories, anticipating an enemy’s movements, guessing the pilot’s intentions and improving them. [1]

The Sù-Jiàn’s variable morphology allows it to exploit both the incredible speed and movement capabilities of its High Mobility shape and the more lethal and precise qualities of its Combat form. In the Sù-Jiàn’s body design the peculiarities of urban combat have been taken into account. The geometry and perspectives of urban fights are very different from those in open fields, as it is much more vertically-oriented. This is why the designers were especially anxious that the Sù-Jiàn would have incredible speed and agility, even on vertical surfaces. The result of this aggressive R&D effort is a unit capable of going where a TAG can’t, thanks to its smaller size, weight and impact on terrain. It is a very quick, agile and mobile unit, equipped with considerable firepower and good armor. All of this adds to the aggressive tactics of its remote operators, creating a highly effective troop in all aspects. [2]

“Yes, effectiveness is great, but the best part of piloting a Sù-Jiàn is activating the boosters and running at top speed through the battlefield, or defying gravity and climbing like a spider up the side of a building to shoot a pair of antitank projectiles at the enemy from where he least expects it!” [3]

“Variable morphology means you can choose between two operative modes: Combat or Mobility. In other words: Kick Ass or Full Throttle.” [4]

[2]- Fragment of “The Future of War” Broadcast no. 93. Program from the military entertaiment channel Sabot! Only in Maya.

Blurring the lines between TAG Remote and powered armour, the Sù-Jiàn is a remotely operated suit of heavy combat armour and considered the pinnacle of the StateEmpire’s military science. This transformative device grants its remote operator TAG-like firepower in an infantry sized package. With more and more TAGs favouring remote operation, the Sù-Jiàn is touted by its supporters as the evolution of both infantry and TAGs alike. 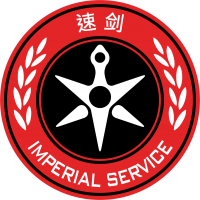 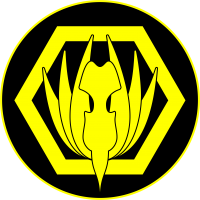 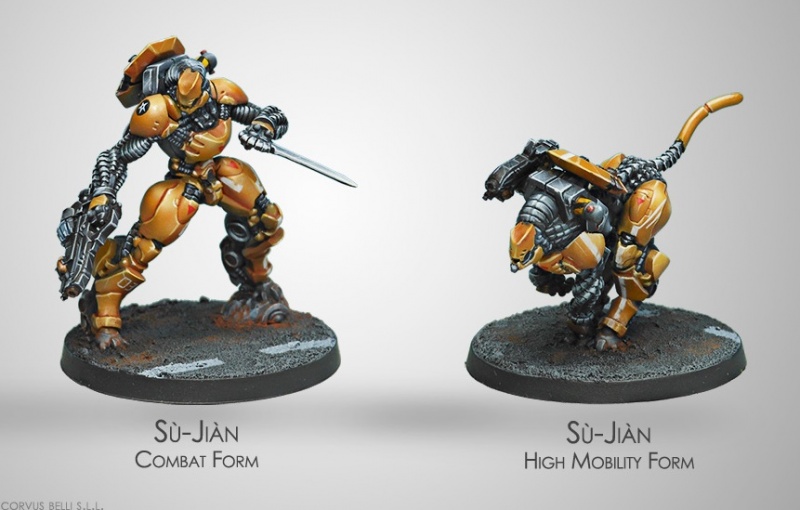 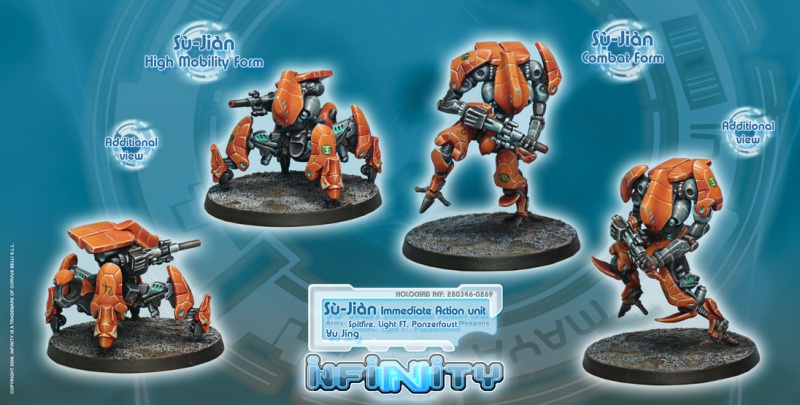