“You can say a prayer, but it’d better be short, because I’ll have you all killed before you finish a long one.” Quote attributed to Joe “Scarface” Turner. Union Revolts of the Jupiter-Pluto circuit.

“Scarface is a scoundrel of the worst kind. He is not just arrogant, but also rash, stubborn and completely out of control. Add to that years of experience in combat and you have the personification of a potential and imminent catastrophe; a danger to all those around him. In short, he is perfect for the kind of operations you want us to run on Ariadna.” Nasim Balidi, tactical manager of the Druze Society. Organizational meeting with representatives of the MagnaObra Corporation. Ariadnan Commercial Conflicts.

“Joe! Don’t jump down there! I don’t care if they have regrouped at the bottom of the C-Hold! It is very deep and I don’t have spare parts for the leg enhancers! Oh… well, you are an idiot! Thanks, brother!” Cordelia Turner through Scarface’s intercom. Defensive operations of the Red Arc orbital shipyard, under contract to the Metroplex Corporation.

“Scarface and Cordelia? A brutal beast for hire and his fairy Godmother. Black and White. One only knows how to destroy while the other can repair anything. The first one wouldn’t last long without the second one.” Emiliano Guevara, officer of Nomads Black Hand. Evaluation report of independent operatives of the Sphere.A lifetime ago, Joe Turner was one of the young freedom fighters from the Independent Corporate Republic of the Meteora Group. The micro-satellite in the Human Edge system that rebelled against the regime of neo-slavery imposed by its owner, Chrommia Corporation. The asteroid’s revolution was secretly supported by the Yănjīng, Yu Jing’s intelligence service, always prepared to damage the interests of PanOceania and its corporations. Joe, along with a few other boys, was furtively brought to a clandestine Yănjīng training center where he was taught how to pilot T.A.G.s and was dosed with the Grade-5 combat drug. I don’t know if you have met a Grade-5 addict? This drug was developed by the Yănjīng to be distributed to frontier territories and in the Third World. As kind and nice as you may be, it changes you completely. It turns you into a violent and dangerous sociopath. And Joe was not very nice to start with. So, when his revolution ended, Joe discovered nobody wanted him on that piece of rock for which he had risked his life. He said goodbye to his family, packed his bags and took off to travel the Sphere as a mercenary T.A.G. pilot.

At some point in his career, Joe got rid of the junk the Yănjīng had given him and got the T.A.G. he has now, a Ramhorn-327 series. This T.A.G. is mass produced by WarTechWorks INC. and made to sell or to give to banana republics related to PanOceania. With time, Joe modified his Ramhorn, adapting it to his particular combat style and personalizing the interface for it to respond to his nervous system, so battered by Grade-5. During the Union Revolts of the Jupiter-Pluto circuit, he defeated an O-Yoroi in close combat, which split the facial plate of his T.A.G. with a cut. Proud of his victory, Joe never repaired that cut, which he wears as a trophy, a decoration to courage that coined the nickname for which he is known in the mercenary world: Scarface. Jumping from one contract to another, and dragged into the hell of drugs by Grade-5, Scarface acquired a deservedly bloody reputation. But where he hit rock bottom was during the Ariadnan Commercial Conflicts. There, working for the Druze society in the MagnaObra corporation’s service, he committed all kinds of excesses that the corporation demanded as terror measures to subdue the Highlanders. Since then, Scarface is a wanted man in Caledonia, where he has a bounty on his head.

It seemed that nothing was going to stop Scarface from his descent into the abyss, but everything changed with the death of his parents in a strange industrial accident. Independence did little to enhance the situation of Meteora’s workers and his parents died in mysterious circumstances, leaving his pre-teenage sister without other support than the stray bullet that was Scarface. Young Cordelia couldn’t stay alone on Meteora, so Scarface took her with him on campaign, leaving her in the rearguard with the support staff and the maintenance engineers while he was at the front. Cordelia was soon drawn to the paramilitary environment, the easy camaraderie of those lonely men, brash talkers and hard drinkers, who quickly adopted her as the group’s pet. Deciding to help her brother in every possible way, Cordelia learned every secret of field maintenance from the technicians and mechanics. Taking advantage of the long hours in the rearguard, Cordelia passed from apprentice to combat engineer with the ease that only an innate talent, maybe inherited from her parents, can give.

Scarface, driven by the sudden responsibility of having to take care of his little sister, found the strength to give up combat drugs. Thanks to Cordelia’s constant support, Scarface severed his destructive relationship with Grade-5. It wasn’t easy, it was a long and hard process, and even while Scarface has been clean for years, Grade-5’s after-effects are still there and his temperament remains a pressure cooker about to explode.

Scarface has still some residual reflex issues from his problem with Grade-5, caused by the alteration of his neural synapses by the drug’s effects. His T.A.G. interface does not still just causes sensory trouble for Scarface, but also pain, a constant and dull agony capable of dragging him into madness and death through over-stimulation. The only thing preventing him from dying in the midst of excruciating pain when he is connected to his T.A.G. is the exhaustive work of Cordelia. The young engineer has been able to attenuate his suffering by placing synaptic dampeners and by performing constant maintenance work on the neuroquantronic link of the Ramhorn’s movement replicators. But despite all his problems, Scarface’s combat instinct is still completely intact, which has turned him into one of the most dangerous pilots in the whole Sphere. Now the two siblings form a team. Scarface in the vanguard, running straight at the enemy, with Cordelia behind, the Jiminy Cricket of the duo, always ready to repair things and get her thoughtless elder brother off the hook. 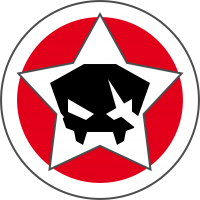 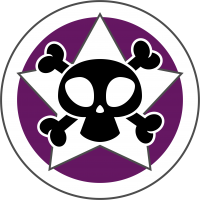 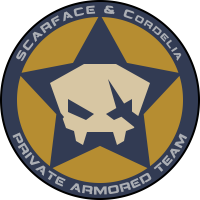 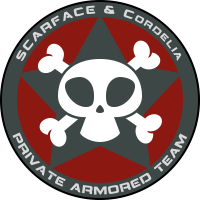 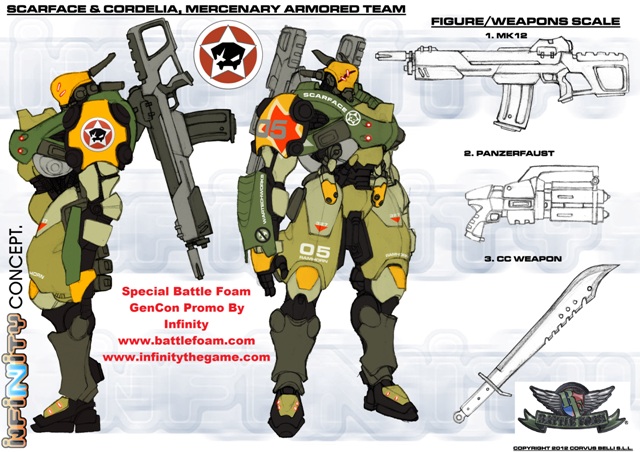 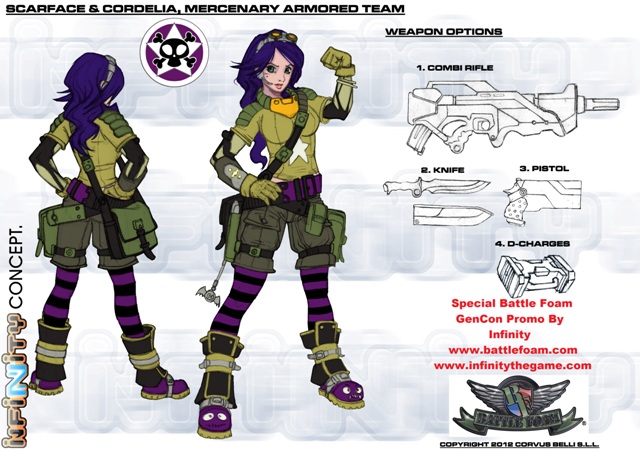 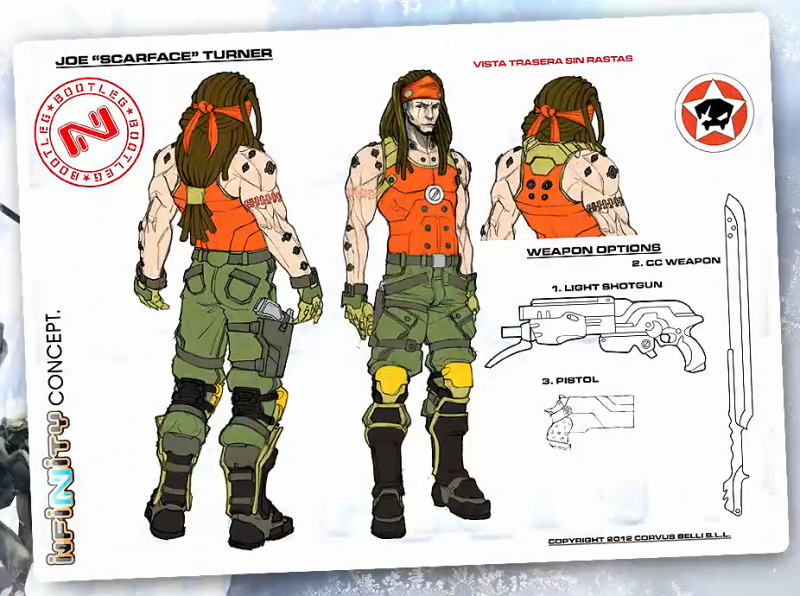 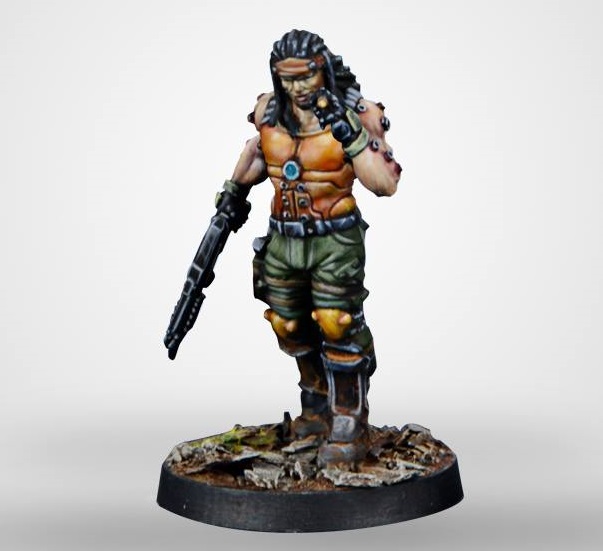 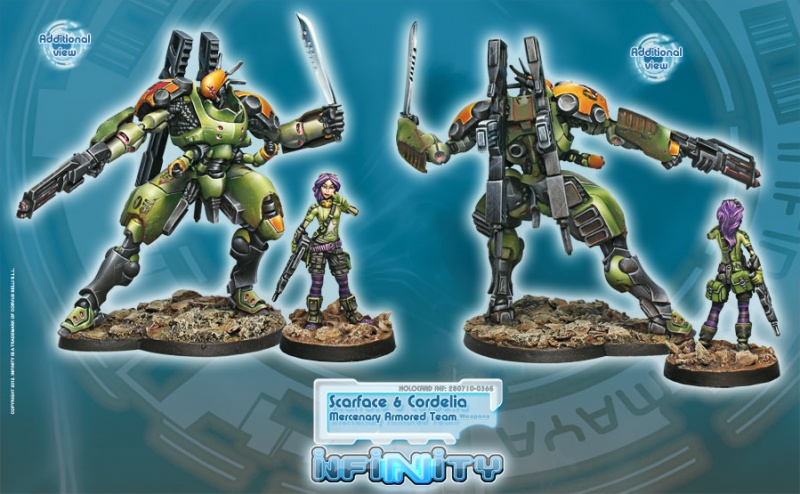 “You have ruined my T.A.G.! And you’ll pay for that! With blood!” Attributed to Joe “Scarface” Turner. Central Front of Norstralia. Paradiso. Second Offensive.

Joe “Scarface” Turner is mercenary T.A.G. pilot with a combat drug addiction in his past who now suffers the consequences, including a violent and volatile temperament. And there is only one thing that pisses him off more than seeing his T.A.G. damaged, and that’s having to explain why to Cordelia, his little sister and the engineer in charge of its maintenance and repair. As this poor Shasvastii Caliban is discovering! 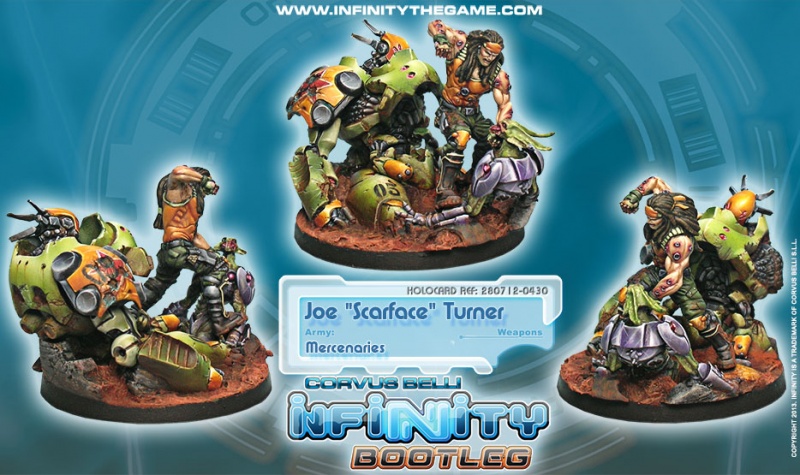