"Secured, you say? Sergeant, I am the daughter and the granddaughter of riveters, and it is perfectly clear to me that structure is not secured at all. None of my men will cross through there until you strengthen all those fasteners, got it?" - Rosie Munroe, patrol operations in Shepard gorge, Ariadna Exclusion Zone.

When the Special Operations Command liaison showed up to try and recruit Rosie Munroe, he found her in the brig for punching a superior. True story, man. They were letting her simmer down, but she was obviously guilty. I mean, a bunch of people saw her do it. Know what she had to say during her court martial? “Motherfucker had it coming, sir.” Now, to be fair, the motherfucker did have it coming. You know the type, a sort of ingrained stupidity that can only be cured with therapy. Well she gave him therapy all right: knuckle therapy. ‘Round these parts you don’t just talk shit about a Riveter, even if you’re her CO. Alright, so Rosie’s not technically a Riveter—that’s exactly why she joined the USARF, so she could leave her village and lead a different life—but her mom and her mom’s mom are Riveters. You could say she’s honorary.

What’s a Riveter? They’re the indefatigable workingwomen of the USAriadnan factories! Flesh-and-blood national treasures. These girls are reckoned to be some of the toughest guys on this gosh-dammed rock. I don’t mean manly. I mean they’re womanly enough to cave your head in, and your swole-ass cousin’s head too if he steps up. The women here are made of wrought steel is what I’m saying. They built this great nation from a hostile, beset soil. You best respect that, and if you don’t, it’s your balls. It very nearly was Rosie’s CO’s balls, matter of fact, so he can count his lucky stars he’s still hanging onto them. Or vice versa. Anyway, Munroe was a Grunt at the time, and I guess she demonstrated some talents that caught the eye of the Spec-Ops people. Judging by her record and her MOS code—Artillery, Explosives, and Demolitions—I’d say she sounds like a ‘damage-to-property’ kinda gal. I mean, who doesn’t enjoy wrecking shit up with malice and forethought? Most USAriadnan women I know are into that, but Rosie’s taken it to the next level. She doesn’t believe in doing a half-assed job, and if that job is to blow bad guys up, her work will be whole-ass—or even double-ass! That’s the kind of determination we need out there, where our country will find nothing but enemies and monsters. 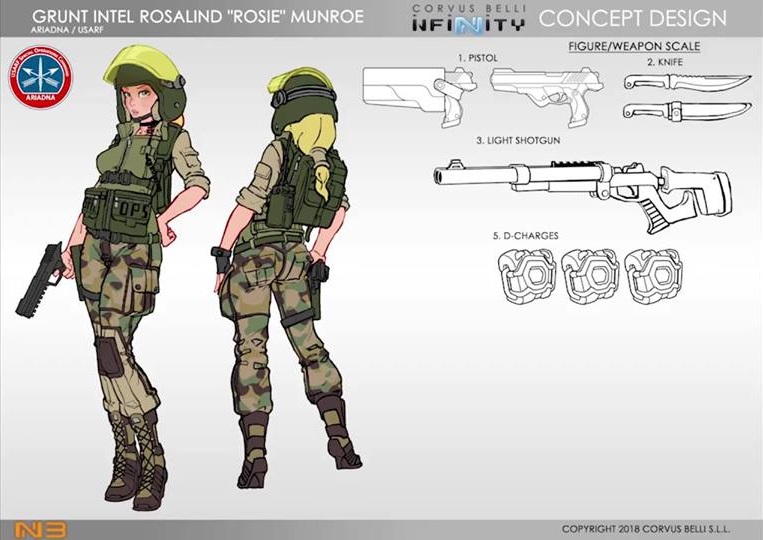