“I could tell you a lot about Ko Dali, but it’s all classified material... She was the best and most lethal operatives that we had in Yanjing… She might seem agreeable and friendly but she’s like a knife in a silk sheath…. If after leaving the service she hadn’t stayed on our side, we would have had to kill her.” Fragment from an interview with a veteran Military Intelligence officer. Documentation taken from the dossier on sergeant Ko Dali.

Ko Dali is an ex Intelligence operative who ruined her career using military means and funds to avenge the death of her father, also an officer in Yanjing. After doing a short prison stretch she joined Special Operations, and from then on her drive and ability has made her a legend among the Tiger Soldiers. The physical appearance of Ko Dali is perfect for undercover operations, because she doesn’t look like a military commando. Her beautiful physique, her voice, soft and purring, and her feline movements, languid but alert, remind you of a tigress, her totemic animal. But her combat style, fast and dirty, is a characteristic of the Military Intelligence agents that have served in dangerous and foul destinations.

A former sergeant of the Tiger Soldiers with a dark past in the service of the Yǎnjīng, Yu Jing’s Military Intelligence department, from which she was expelled in disgrace, Ko Dali was a living legend in the StateEmpire army. A lover of danger and an expert in spectacular actions, this experienced and lethal special operations commando was declared dead during a mission behind enemy lines on Paradiso. But all felines have nine lives and death was not able to sink its claws into the Silk Tigress. Seriously wounded, she was captured by the troops of the Combined Army, who placed her directly into the hands of the EI. Unconfirmed reports say Ko Dali was healed and genetically altered to be even better than she was before. But she was also Sepsitorized, turning her loyalty unconditionally towards the EI and turning her against her old friends and even her race. Now, Ko Dali is back, more deadly and lethal than ever, like a grim omen of what awaits the Human Sphere. The most beautiful tigress of Yu Jing is the new banner of the EI. Ko Dali has declared war on humanity and so far she has never failed in her mission. The countdown to conquest has begun! 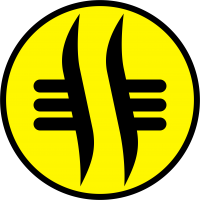 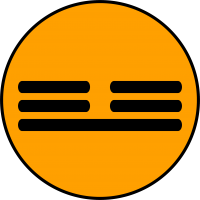 Above, Ko Dali's logo when she was part of Yu Jing. 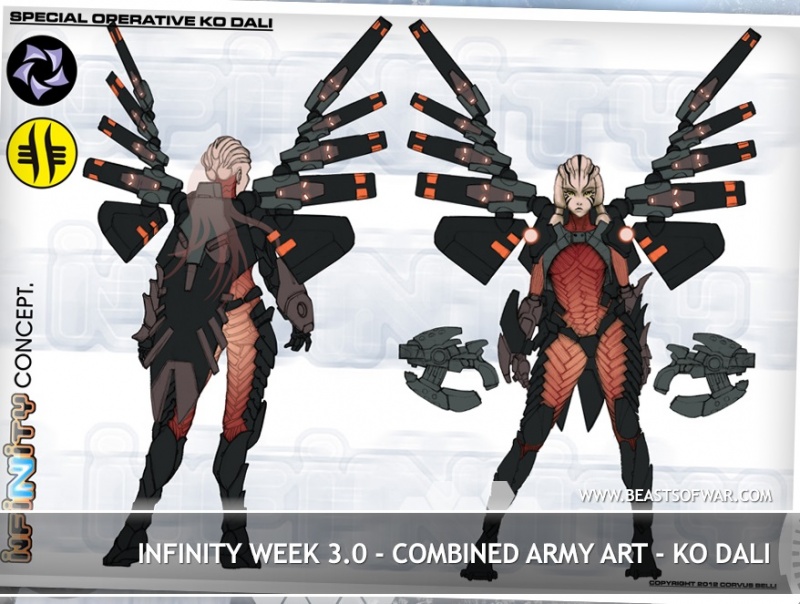 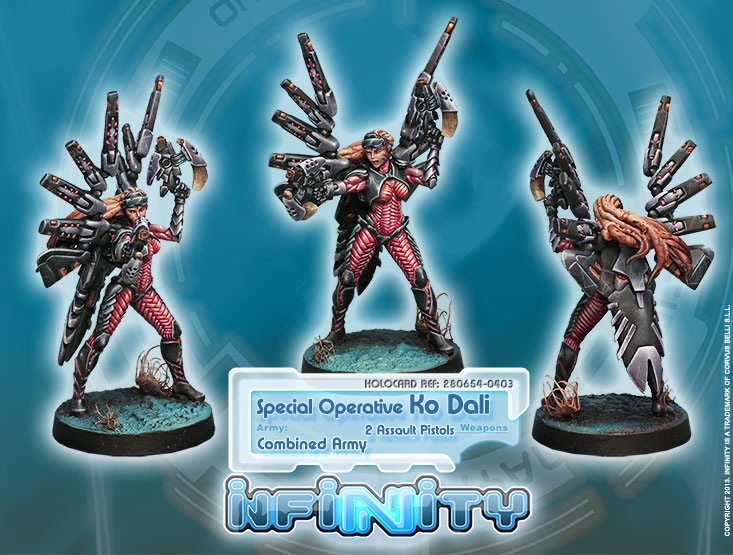 Included in the Betrayal box set. 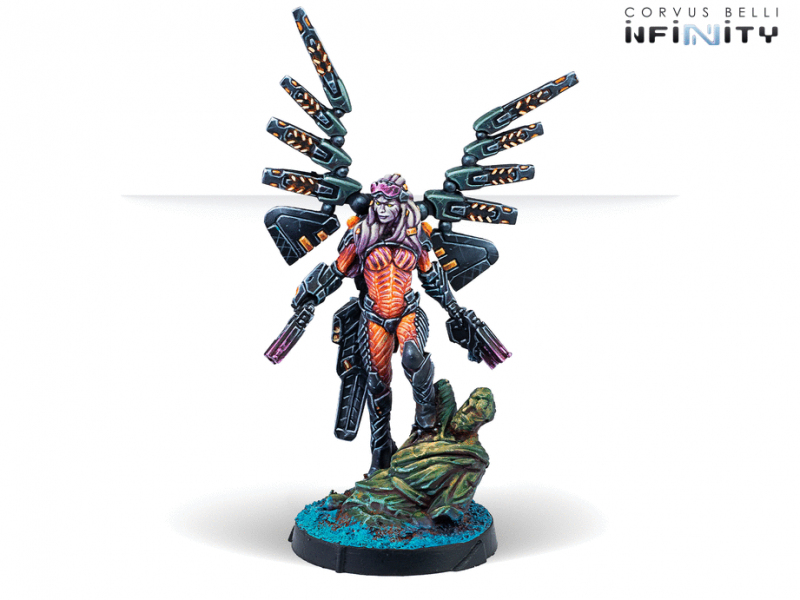 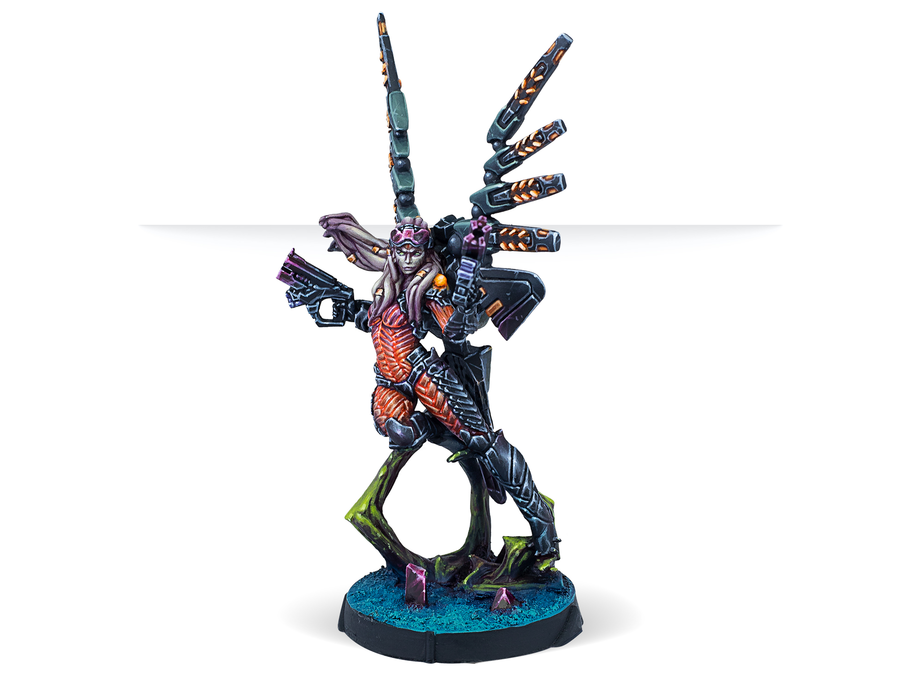 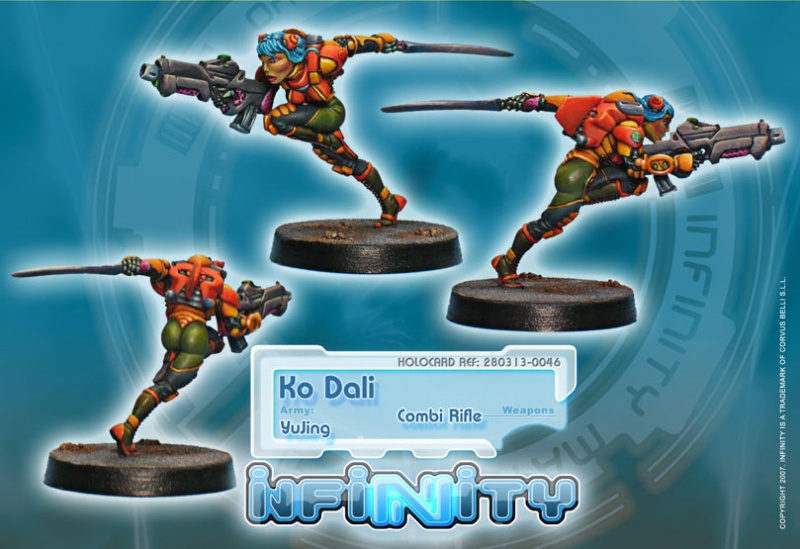 Originally, Ko Dali was a Yu Jing Tiger Soldier named character. In the events of Campaign Paradiso, she is captured and converted into a Combined Army trooper. At that point, her Yu Jing profile was retired.