"I love the smell of Napalm in the morning."

Fiddler is an Ariadne activist engineer welcomed by the Nomad Nation who needs to fight in the HexaDome with her Jackbots to fulfill a dream.[1]

Twenty-six years ago, Nikolay Vorobiov was born in the most important industrial city of Rodina, on the planet Dawn. Raised under an identity that her family considered masculine, Nikolay showed prodigious mechanical skills from a very young age. Her family supported her to take her abilities further by studying engineering, which they thought it would help her to get a great future in one of the many factories that composed the tall smoky chimney silhouettes of her native Dynamo.

As she turned into an adolescent, Nikolay’s uncertainties about her gender began to flourish. She started to actively desire to change her body’s appearance, an underlying concern since her childhood. In some developed nations in the Human Sphere (suchas PanOceania or the Nomad Nation) encouraged individual freedom, meaning their populace could modify their appearance without being judged. However, things were quite different in dull and traditional Rodina, where its inhabitants exhibited a twenty-first-century mindset.

Nikolay felt trapped in a body that she rejected, and at the same time, imprisoned in a society that didn’t have any plan to accept her or any other people suffering inequity just because they were somehow different. As she would learn, Ariadna society punished individuality and forced what they considered a second-class community to accept jobs in the worst positions of the Dynamo factories, where conditions were as dangerous as they were unhealthy. No one gave a shit about them.

Although Nikolay managed to hide her gender while she studied for an Engineering degree, she was still observing the social reality of those who were like her. Her concerns led her to come into contact with an clandestine activist group who committed small vandalism acts across the city. When the revolutionary band decided to go further by entering the DynamoKon facilities, the military security units they ran into arrested almost the entire group. Nikolay barely managed to flee the city, hiding in a Nomadic vehicle. As soon as the Nomadic delegation she ran into arrived at the commercial mission located in the peripheries of Dynamo, the young engineer asked for political asylum. Luckily for her, Nomadic officers embraced her cause and helped her process her request.

For the next couple of years, Nikolay earned a living working in hardware maintenance teams, traveling through space aboard nomadic cargo ships. Her co-workers gave her the nickname “Fiddler” - inspired on the way she liked to hold a key : she gripped it with her chin against her shoulder, the way a violinist holds its precious instrument. It wasn’t until her trip to Bakunin when she fulfilled her desire to change her body. She finally had left Nikolay behind to become Nadezhda, although by that time everyone called her Fiddler.

As far as being done with that, she soon realized her desire to modify her bodily appearance was going beyond the barriers that gender stereotypes had instilled her during her childhood. Her passion for machines prompted her to design and develop on her own prehensile cybernetic tail that would be implanted to ease her work. Fiddler customized her appearance in the radical Bakunin style. Later, she would replace her right arm with a cybernetic one that gave her the strength and precision needed to build more mechanical devices. Unhappy with the result, she decided to complete her transformation by adopting a hominid aspect, reducing her already diminutive size. Her new appearance reminded her of how much she wanted to resume her activist past, but life in Bakunin is hard for a young engineer who doesn’t earn enough to afford illegal activities in another system.

Fiddler decided then to enter the illegal Aristeia! Underground circuits in Corregidor, where she began to earn enough money to finance her Ariadne comrades while she invested in her numerous cybernetic designs. After several seasons offering remarkably efficient shows, the particular and personal combating style she developed thanks to her Jackbots caught the attention of a shadowy investment group.

Although many specialized media have questioned the identity of her sponsors and believe that Fiddler is nothing more than a symbol to focus the attention on the cause they openly support, no one can argue her Jackbots remarkable effectiveness on the HexaDome. This season, Fiddler has new aspirations; her love for machines has evolved her mind and had given her a new goal to fulfill - the ultimate transformation.[2]

We can find Nadezhda Vorobiov origins in Ariadna, where she learned everything she knows about weapons and engines. A knowledge that later would translate into the creation of the Vulkan Jackbots - the minions she uses to move and shoot in the HexaDome. After having to run away from her home planet and live an adventurous life in the nomadic motherships, she arrived in Bakunin, where she finally started her first change: gender-reassignment. It didn’t take long until the second transformation. Nadezhda had been dreaming of returning to a more primitive state since she was living in Dawn. Now, she finally could achieve it thanks to the Black Laboratories. That’s precisely why the Bakunin Moderators watch her closely: she’s not far from violating the Nomadic “Code” of behaviour.[3]

Nadezhda “Fiddler” Vorobiov is an Ariadnan engineer. She lived her first years locked in a body that didn’t allow her to develop her full potential, trapped in a society that didn’t understand those that were like her. Her rebellious soul searched around and found others who also suffered for being different, treated as second-class citizens. She committed acts of vandalism that led her to seek political asylum within the Nomad Nation, where she finally found a hardware maintenance team job and where she would get her nickname “Fiddler” because of the way she held the key with her chin against her shoulder.

It wasn’t until she arrived at the Nomad Nation when she started to feel free to become whatever she wanted to be.[4] 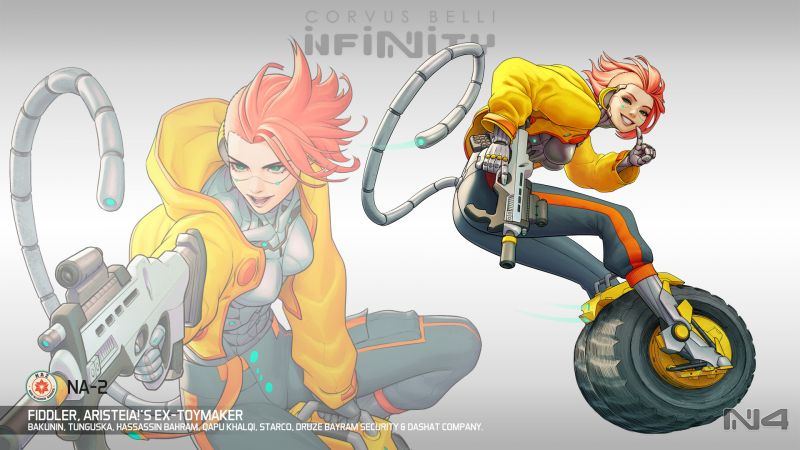 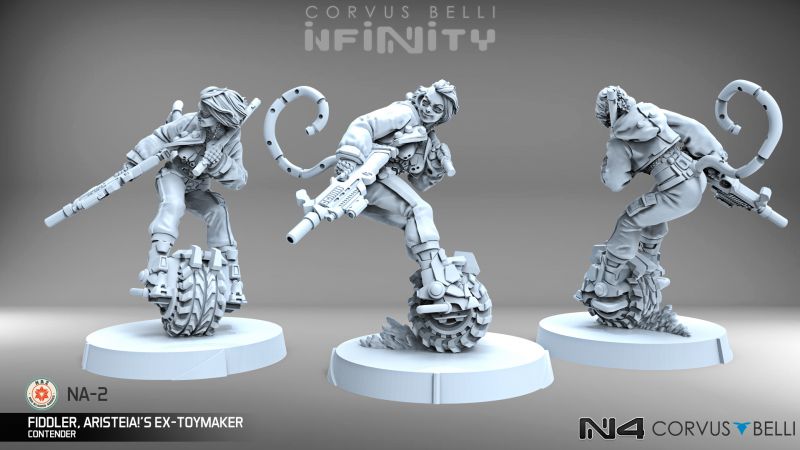 None at this time. See Limited Edition for more information. 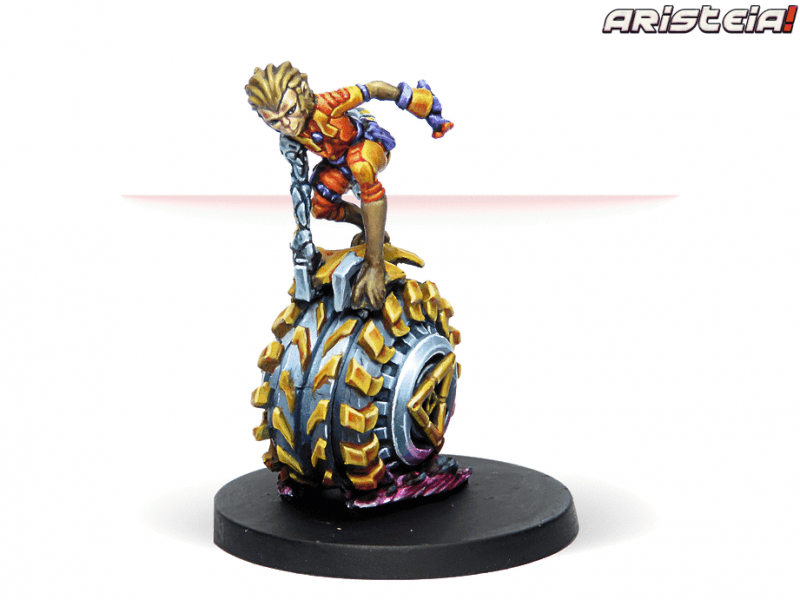 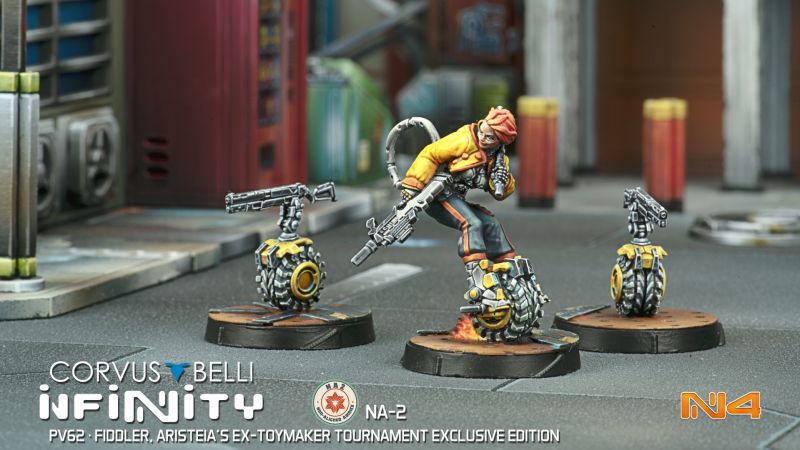