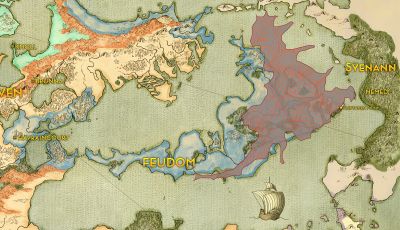 The people in Feudom feel they are the heirs of a legendary past, and they believe they were chosen by the Moon goddesses: Selas and Losna. And they do have their good reasons to believe so! Religion is quite an important part of their society. The charge of their knights is unstoppable, sheltered by the priestesses in combat. The forces of Feudom are predominantly human.[1]

More than a thousand years ago, the elvish empire of Gae Assail collapsed as it was devoured by a civil war between the Radiant Elves and the Darkmind Elves.

One of the peoples long under the elves' rule were the Widhta, who succeeded in unifying part of the war-torn lands, creating the basis of what would eventually be known as Feudom.

Feudom citizens still honor their forefathers' traditions and their faith in the Moon Goddesses, Selas and Losna. All of this has contributed towards the consolidation of a prosperous society in which all individuals know their place.

Most of the population is disperse across small towns in the coast or the countryside, working the fields, herding livestock, or fishing. Meanwhile, fairs, markets and the famous tournaments are held within the walls of the cities.

On the other hand, erstwhile estates lay long abandoned: sites of legendary battles, unfathomable calamities, or unsolved mysteries that live on in the songs of bards, who may likewise tell the uncanny tales of hamlets swallowed whole by the Fog, only to reemerge from it devoid of life...

But reaching the degree of prosperity Feudom would have been impossible without the presence and the fortitude of its knights, the armed wing of the kingdom, and of its priestesses, fighters whose prayers and blessings grant protection and further enhance the virtues of these honorable warriors.

This young empire can only watch helplessly as Feudom's forces are bolstered by psalms, blessings, and prayers, even though in The Hegemony's eyes they are nothing but magic. In truth, The Hegemony has always coveted the knowledge that Feudom has kept since the Widhta era, especially now that said prayers and rites have ever more powerful and accurate effects as they benefit from the rising cycle of magic.

A Matter of Honor

Feudom is the kingdom of honor. It is a land where the value of an oath and the integrity of one's actions constitute a true matter of honor. Its knights, ever so proud of their commitment to the highest chivalric codes, would gladly give their lives to do what is right, whether it is protecting the innocent, defending their liege lord, the kingdom, or themselves.

To that end, they shan't hesitate to draw swords and dye their blades red with blood to deliver the Moon Goddesses' justice to the world. They are their defenders.

They are their chosen ones.

Feudom lacks an army the likes of other nations and empires such as The Hegemony.

The ranks of The Hegemony's army are filled with soldiers who sign up for a handful of coins and mercenaries who sell their allegiance to the highest bidder, while Feudom's warriors are moved by the strength and the moral realization of their faith and honor, blessed by divine favor and heirs of to legendary past.

But the staple of Feudom's troops is their knights and their priestesses, whose support is paramount to leading them to victory.

In fact, these women are usually the main target of their enemies when spotted on the battlefield, since they act as the most impregnable defense for the troops they escort.

The Knightly Orders in Feudom

Knightly Orders are secular and territorial military institutions bound to the duchy, county, or mark of the member of the nobility who found them, who also acts as their magister, the highest rank within the order.

This allows them to count on a host of knights who are always prepared to do battle, safeguard their lands, quell uprisings, defend their honor, or fight any rebellious vassals, in addition, to answering the king's call to arms if needs be.

The Order of Losna

Staff FeudomThe Order of the Knights of Losna is a religious and military institution based on a strict set of rules that codifies its general duties and principles, some of which it shares with the other Knightly Orders.

However, given that they are comprised of monk-knights, they carry out special tasks destined to provide support and protection to the Church of the Moon Goddesses and everything it stands for.

The Order of Selas

The Order of the Sacred Priestesses of Selas is one of the most beloved, respected, and feared institutions in Feudom.

Less quarrelsome than the knights of Feudom, but just as relentless, the priestesses of Selas have the power of invoking the Goddesses and receive an answer through worship formulas such as prayers, psalms, and blessings.

That is why the mere presence of a priestess among the knights on the battlefield is enough to fill the hearts of enemies with dread.

The Fog is one of the most sinister and unsettling presences in Lindwurm, but since it has been in contact with Feudom the longest, its citizens are the ones who know it better.

It has always been there, so the populace of Feudom has grown accustomed to living with the ever-present danger of its ebb and flow on the Island of Assail, where it has advanced and retreated in one way or the other across history.

Countless are legends told about the Fog.

In regions such as Levanesse and Landry, locals might say that they could tell when it is about to advance or to spew out some grotesque remains as if it were the very seas, and they will advise caution when the eastern winds blow since it is considered a bad omen.

But regardless of what they say, their compatriots would refrain from dwelling near this beating mist, regardless of the intentions of the adventurers arriving from the free city of Hawthorn Point, who would dare penetrate it without a clear understanding of what they are about to face.

Only the most curious and skeptical, those who need to see it with their own eyes, would dare set foot in inner Assail to contemplate the Fog—from a proper distance—in an attempt to understand this ominous presence that has been linked to Feudom since the very beginning, in times when the Widhta became the Chosen People.[3] 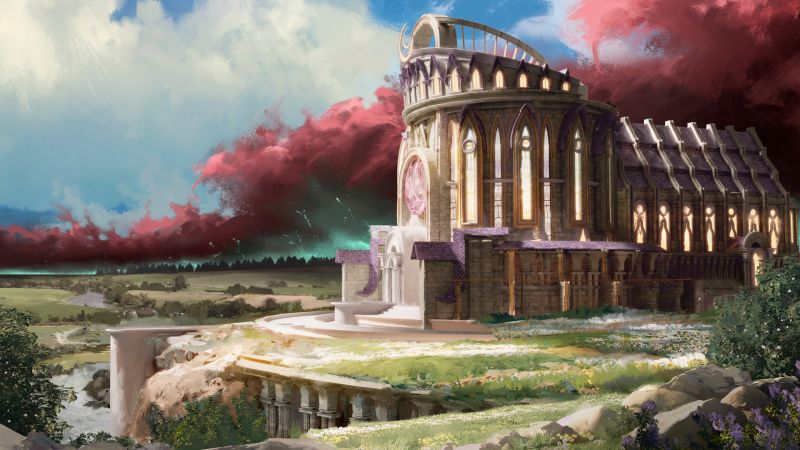 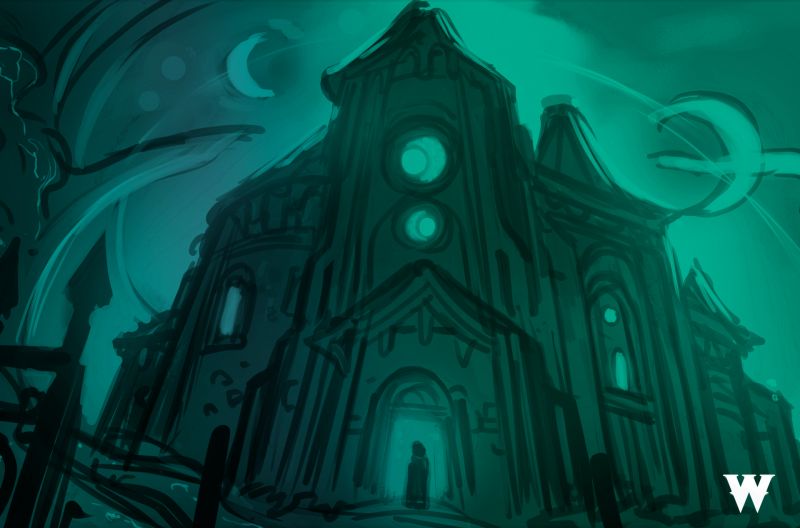 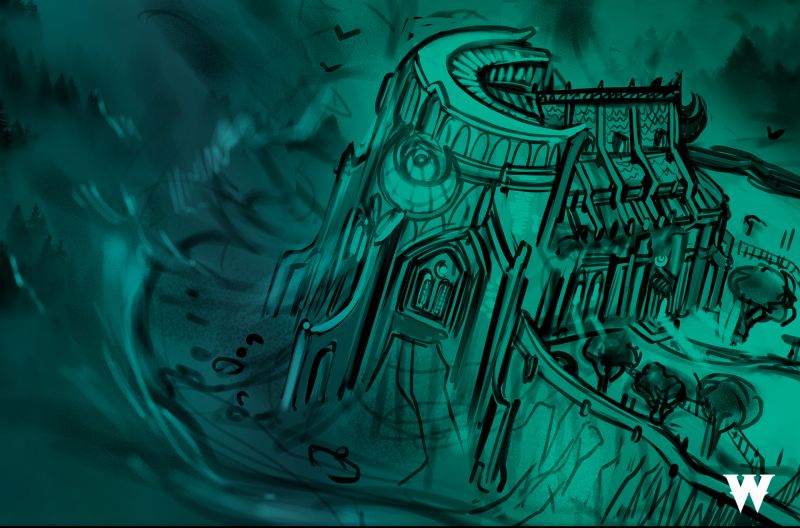 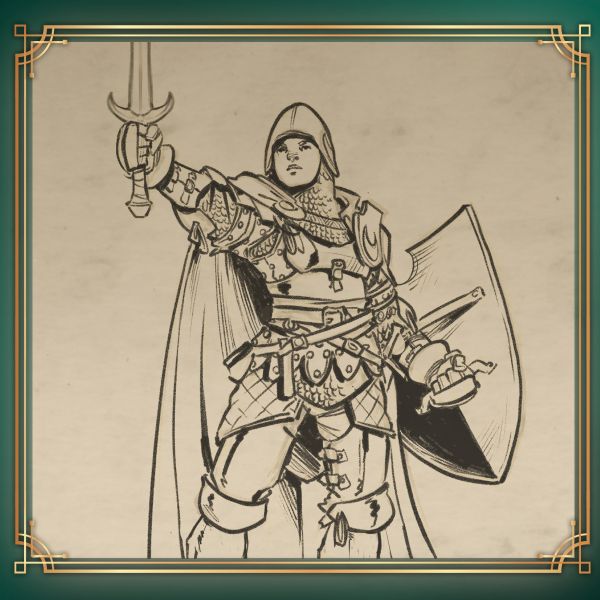