Each Dire Foes mission pack contains two opposing characters with their own unique profiles, a unique civilian miniature, printed art cards and a download code which grants access to a special scenario involving these new troops.

Angus did it again! Prisoner of the Yu Jing State Empire, two women will fight to rescue him, the Indigo Fusilier Bipandra spurred on by something more than loyalty, and the Treitak Anyat by the secrets Angus doesn't know he carries in his Cube. Find out what the fate of poor Angus will be with the “Train Rescue” mission and play this new scenario with its true protagonists!

Absolutely unbelievable! ALEPH and Nomads collaborating together? What could force Vortex Lupe Balboa and Sgt. Chandra Thrasymedes to cooperate in a mission where they are supposed to confront each other? What secrets do these two elite operators hide? Discover it with the “Fleeting Alliance” mission and play this new scenario with its true protagonists!

Clandestine actions into the deepest darkness! Intel Isobel MacGregor, an expert Caledonian data-thief, and Gui Feng Yuriko Oda, elite saboteur and Kempeitai killer, fight each other in the deepest darkness, and a poor Comm-Tech is caught in the middle of their struggle! To know what the final result of the “Dark Mist” mission will be, play this new scenario with its true protagonists!

In Flee or Die the PanOceanian Military Orders face off against the Hassassins in a duel of faiths! Boosted by the highest ideals, the Hassassin Yasbir and Brother Konstantinos fight for the life of the CEO of MagnaObra. Will she pay for the crimes of this corporation or will she be escape unscathed and unrepentant? Who will prevail? Take to the table top and decide!

In Viral Outbreak the forces of the Tohaa face off against the Shasvastii with HAZMAT A1 Specialists caught in the middle. In a hostile infectious environment the scene is set where the Hatail Aelis Keesan will resolve their issues with the perfidious Corax Hasht in blood and fire!

Another mission box providing two enemy characters and also a Civilian model, printed artwork In Viral Outbreak, the opposing forces are the Tohaa and the Shasvastii.

The HAZMAT A1 Specialists are called “the ghosts of the dead zones”. And there, in such hostile environment, is where the Hatail Aelis Keesan and the perfidious Corax Hasht will resolve all their issues with blood and fire!

A Freelance Stringer has received a packet of confidential data that unveils a dark plot and the time has come to face a defiant truth. A race against the clock in which the Gui Feng Xi Zhuang and the Husam Leila Sharif will face each other for the control of that information.

We all know that Infinity is a sci-fi and special operations wargame, but the Dire Foe Mission Packs provide a different game experience!

At the epicenter of every risky mission there is a civilian that kick-starts the confrontation of two irreconcilable enemies, intertwining both character's stories.

Do you want to know the main characters of the latest Dire Foes mission? Keep reading!

You will delve in a dangerous haze of intrigue at the hand of the tough Grunt "Rosie" Munroe (don't let her sweet name fool you or you'll pay), the merciless Nexus-7 Kerr-Nau (Does the Combined Army have a heart?) and Maya's sensadrama super star, Candy Double (the most daring investigator from your favorite channel).

Hope your life insurance payments are up to date!

Candy Double, the celeb Maya star and famous investigator, has discovered a Combined Army plan to alter the Dark Mist technology spread on planet Dawn, turning the visual interference clouds into a mortal weapon to everyone who gets near them. An emergency team has been sent to the Onyx Force clandestine processing facilities in Novyy Cimmeria to find out how to disconnect this corrupting technology. It is of vital importance to complete the sequencing analysis to obtain the necessary data that will allow to nullify these lethal clouds. But it is also very important to stop Candy Double, the Maya star that must not reveal to the rest of the Human Sphere the extent of the EI plans on Dawn, to avoid panic from spreading through the population.

This background mission revolves around the events of the Third Offensive. After the Combined Army attacked Paradiso, the Shrine-city of Vedi has gone from being a tourist complex to become the main refugee reception center. NGOs expand their influence wherever civilians are in danger. Unfortunately, it seems that not only humanitarian aid is arriving at Vedi, but also the birth of an emerging black market.

Susan Harlow is the NGO Freedom International Coordinator, which aims to put an end to this situation. That’s the main reason the fearsome criminal association Druze Bayram Security will try to get her out of the way - no matter the cost.

However, Susan is protected at all costs by StarCo, the Free Company of the Star - owner of NGOs so powerful as Freedom International or Children Protection.

Knauf and Arslan will compete in the middle of this conflict to achieve completely opposite goals and relive the old bitter resentment arisen during the events of Infinity: Outrage.

Dire Foes missions come back with its 8th edition including the main character from the Outrage comic. This box contains three miniatures - Knauf, Outlaw Sniper, the Security Chief Arslan, leader of the Druze Bayram Security, and an NGO Volunteer.

This Mission Pack is the perfect way to immerse yourself in the Infinity Universe, playing with miniatures from different factions in order to complete the story-based mission: Nocturne.

If you love to just collect miniatures, you can’t miss the Outrage miniatures box - but if you prefer competitive play, here is a good list of Infinity profiles to play alongside your Dire Foes miniatures: Brawlers set, Druze Shock Team, Anaconda Mercenary Tag, and Corregidor Alguaciles. 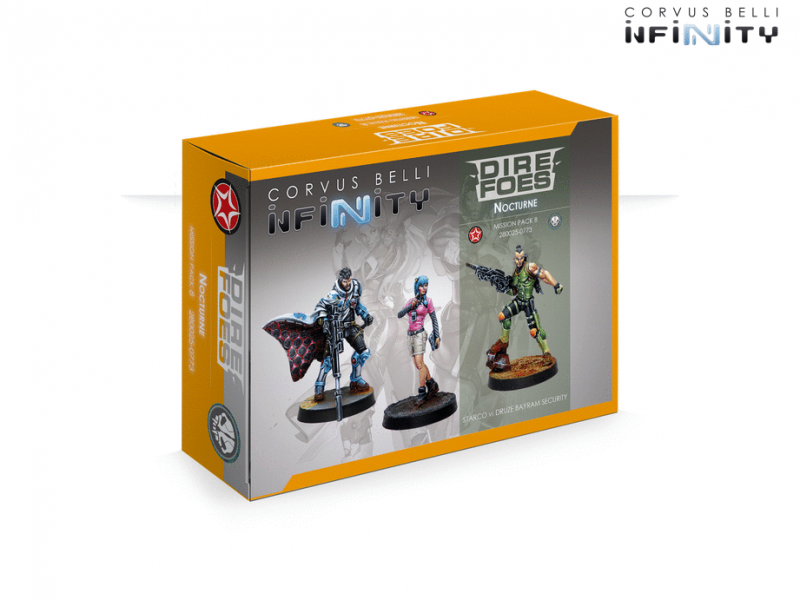 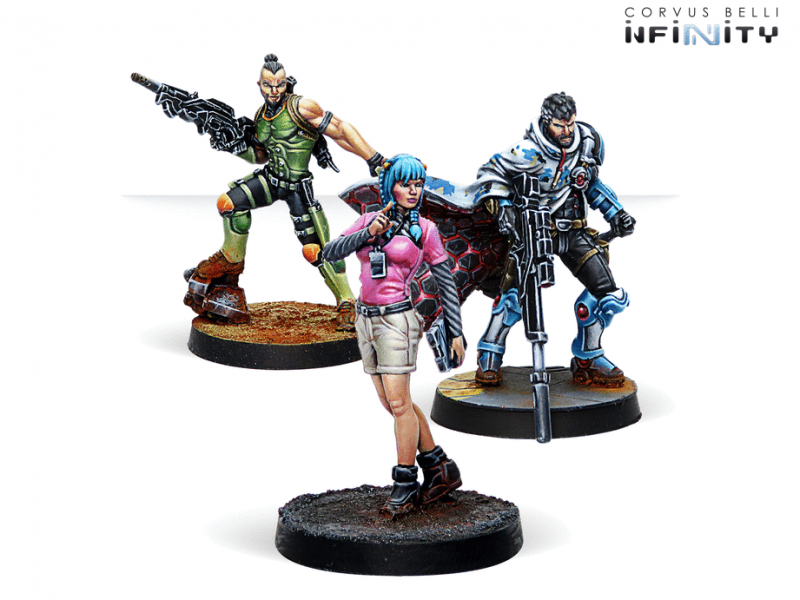 No one likes having competition, and Tunguska likes it less than most. This is evidenced by their relative lack of business rivals in the whole of the Human Sphere. So when a group of entrepreneurs tries to establish a small data haven in a old, stranded freighter orbiting a gas giant in Human Edge, expect Tunguska to react—especially if this data haven is a direct competitor of the Novyy Bangkok branch of the Bank of Tunguska. This is one of those situations the Nomad mothership takes personally, which means that Dragnet has its sights set on both this datacrypt’s databanker and its master server. But of course when this business venture is actually a covert parallel-financing operation of the Hexahedron, real trouble is certain, because it won't be a private security detachment that responds to the intrusion alert, but an immediate reaction unit from the Varuna Snake Eaters or maybe from some Neoterran elite corps. So, that's how Jelena Kovac, a police inspector breaking international laws, and Richard Quinn, a professional executioner forced to protect someone, crossed paths.

To keep their primacy in the data banking business, Tunguska must sweep aside any competitor, even if that competitor is a covert parallel-financing operation of the Hexahedron. But PanOceania knows about the fight for primacy, and the Fusilier Indigo Richard Quinn is going to show it to DI Jelena Kovač and her Dragnet team. 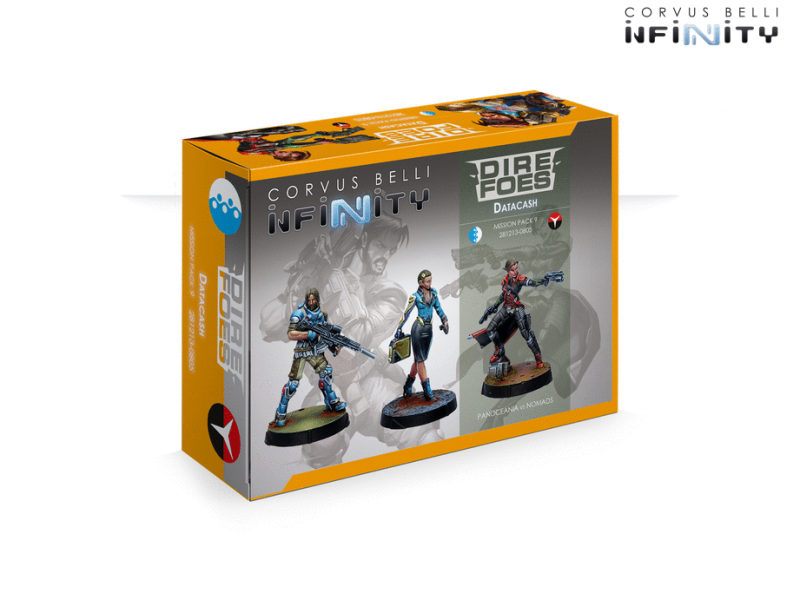 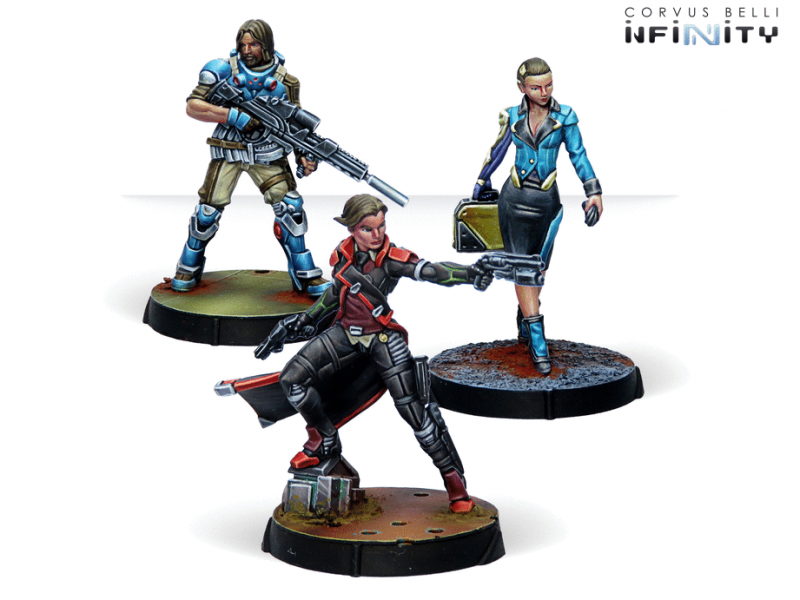 The StateEmpire’s memory is as good as its willingness to forgive is absent. Hence, it didn’t waste the slightest opportunity to take revenge after PanOceania supported the Japanese insurgents during the Uprising. So, when Yănjīng, its intelligence service, learned that the PanOceanian corporation Minescorp was going to conduct field tests for an innovative and revolutionary new technology to find Nessium, a highly valuable neomaterial, Yu Jing saw this as an opportunity to take its rightful revenge. Swiftly and efficiently, a covert-ops team from the White Banner Army, Yu Jing’s planetary force on Svalarheima, launched an assault on the Minescorp facilities and seized a sample of this technology. Although the objective was not completely achieved, as they failed to destroy this technology’s research data to leave Minescorp with nothing, this strike was seen as a direct attack on PanOceanian sovereignty. So, the wheel of rancor kept turning.

The visit of a Yu Jing ambassador to Odinheim, the planetary capital of Svalarheima, opened a window of opportunity for WinterFor, the PanOceanian planetary force, to capture a high-value target. Even though Odinheim is supposed to be a neutral city, it is in fact surrounded by WinterFor forces and located in the heart of the PanOceanian territory, and hence no one considers it as such. For this reason, a capture and extraction operation in Odinheim would not be diplomatically acceptable. However, Tongue-twister—the codename for the Communications Analysis Office of the PanOceanian intelligence service that engages in cryptanalysis—intercepted a series of messages concerning the ambassador’s itinerary. This diplomat had scheduled a visit to the Lándòng facilities, an apparently insignificant environmental research center located beyond the Boundary Territories in the empty plains of Huangdi’s hinterland. It’s a place impossible to reach without being discovered—impossible unless you have on your team a tracker and Troll-Hunter like Gunnar Lundmark, who can infiltrate and exfiltrate a hunting party along routes unknown to the Yu Jing mapping service itself. Of course, this is easier said than done. This mysterious ambassador has recruited as his personal bodyguard Imperial Agent Adil Mehmut, an extraordinary operative with a special interest in keeping the diplomat safe. Who knows? Perhaps Gunnar’s hammer has found an anvil it’s incapable of breaking.

PanOceania knows that a power does not maintain its supremacy by allowing any attack against it to go unpunished. Following the events in Kaldstrøm, a representative of the Yu Jing diplomatic corps who is visiting Huangdi will be the target of a team led by Troll-hunter Gunnar Lundmark. Of course, with Imperial Agent Adil Mehmut of the Special Division as the diplomat’s bodyguard, the task will not be easy.

With this box you can not only expand your collection of Infinity CodeOne miniatures, but you will get new options for your army—giving them personality with these two heroes—and also a neutral model to play missions and scenarios. 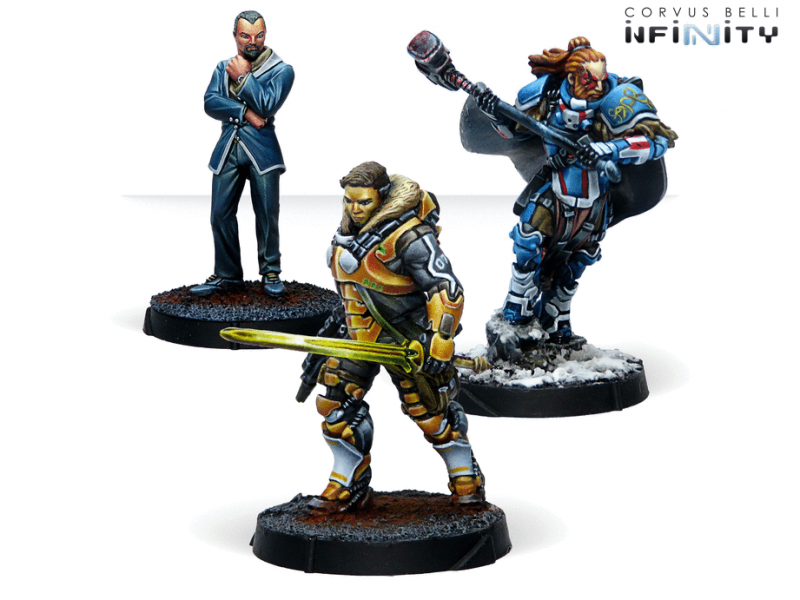 While trying to protect the interests of her fellow prospectors, a space miner is caught in the crossfire between a Shasvastii raiding force and an O-12 Bureau Aegis team that believed it was just going to take down a corporate scheme. Tunnel-crumbler sargosh wants to capture her to find out how much she knows and who else she’s told, while casanova cannot help but act like she’s a damsel in distress — even if she’s no damsel at all!

What could possibly have kept Casanova, that handsome devil, away from parties at embassies and dragged him to a dump like Hlökk Station, a mining facility in the Brísingamen Asteroid Belt? What seemed like a no-brainer mission for O-12, investigating Minescorp's dirty laundry, has turned out to be a Shasvastii covert operation. And Sargosh, the Jayth Tunnel-Crumbler, will not let Casanova thwart it, not even if some prospector gets in the way, no matter how pretty she is

This box includes 3 miniatures: the NOC Operative Casanova, Sargosh, Tunnel-crumbler of the Jayth Cutthroats, and a Prospector, a freelance space miner.

With this box you can not only expand your collection of Infinity CodeOne miniatures, but you will get new options for your army—giving them personality with these two heroes—and also a neutral model to use in missions and scenarios. 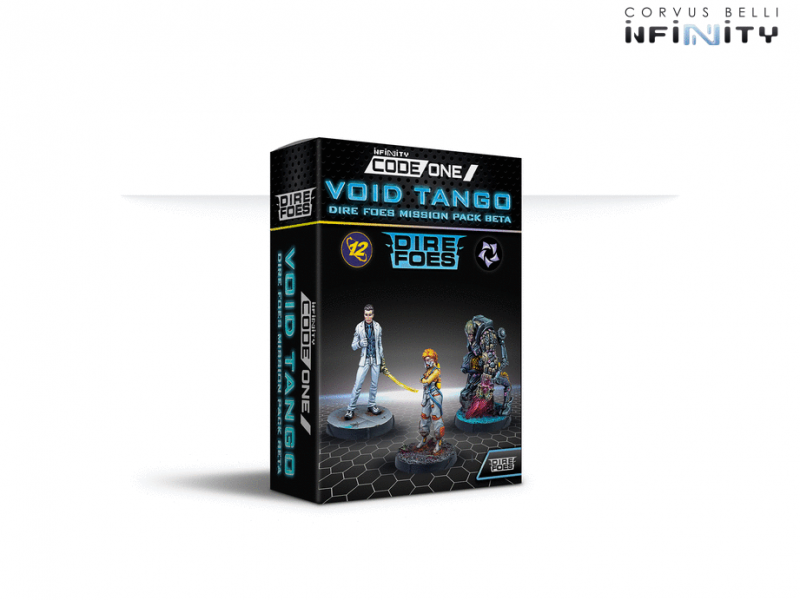 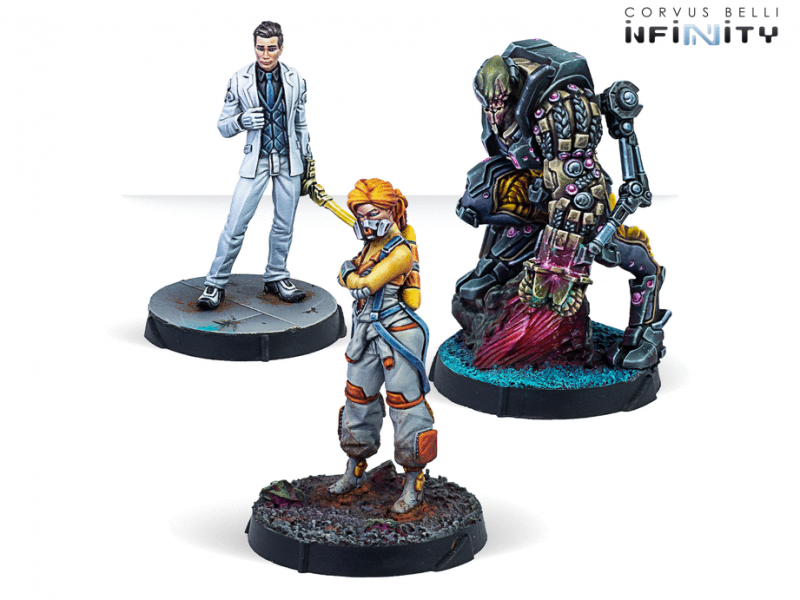