The hostile planet par excellence, featuring a harsh climate and beasts eager to devour anyone who gets in their way. Home to Ariadna - humanity’s first colony outside the Solar System. This planet was isolated for 150 years after its wormhole collapsed, leaving colonists stranded and having to fend for themselves against tribes of vicious Antipodes - the ruthless and fiercely territorial aliens native to this world. After reestablishing contact with the Human Sphere, Dawn is still a frontier planet - a technologically backwards place where Mother Nature is still the most lethal of enemies. Most importantly though, Dawn is rich in Teseum - a valuable neo-material that all powers covet and seek to attain at all costs. This is Ariadna’s strategic economic advantage, as they possess an asset to trade, and which Ariadna will not hesitate to defend from the greed of foreigners with its high-caliber ammunition and swords, made of the same material, by any means necessary.[1] 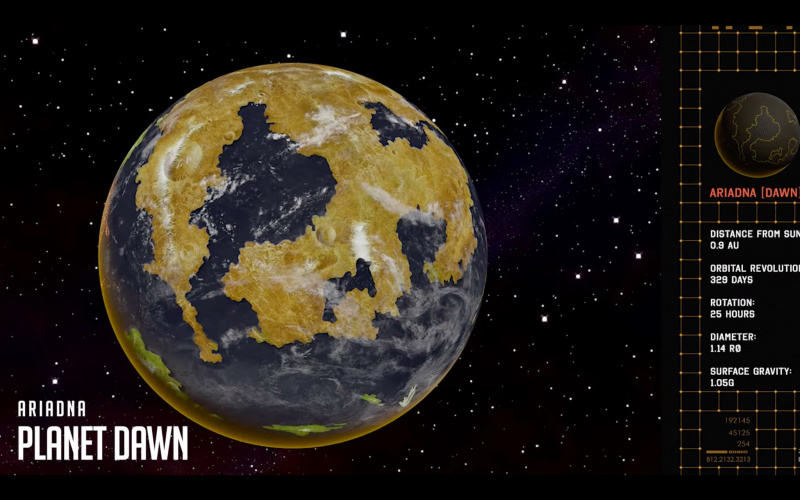 Left[2] to their own devices on a hostile, resource-poor planet, endurance and mettle had to make up for the lack of state-of-the-art technology. Cossack, american, french and scottish fought each other and they all fought the planet, and from all this fighting emerged ariadna, where only the toughest survive. Welcome to ariadna. Welcome to hell.[3]

“Project DAWN” was the name of the most ambitious space colonizing enterprise of the first century of the third millennium. The fortuitous discovery of the extraterrestrial object denominated GA6037283, the first viable wormhole known to Humanity, allowed the world’s space agencies to seriously entertain the possibility of space travel beyond the Solar System. This was the genesis of Project DAWN as a joint effort between NASA, the European Space Agency, and the Russian Cosmonautical Agency. The initial phase of the project involved launching a probe through the wormhole and then retrieving it. The probe, named Lapérouse, came back from the other side with a preliminary analysis of a planetary system identified as Helios.

The biophysical reports on the fourth planet assured its suitability for colonization. This planet was called Dawn (Aube, Amanecer, Paccвeт) to symbolize the dawn of a new age for Humanity.

In order to guarantee the safety of the trip and the stability of the wormhole, a third probe, Pallas, was sent to double-check the data on the planet and the Gate. Thus began the design of a second seed ship, which was given the name of its destination: Aurora. Tragically, the Aurora never arrived at its destination.

When the wormhole collapsed on the passing spacecraft, the Aurora was lost and the Dawn system was left isolated from the rest of Humanity. Their lack of long-range astronomical sensors meant the crew of the Ariadna was oblivious to the collapse of the Gate. The colonization project continued normally as per the original plan. After months of preparation, the definitive landing of the Ariadna mothership finally took place. The gargantuan craft served as interim shelter and was progressively transformed into a permanent building, never to traverse space again. 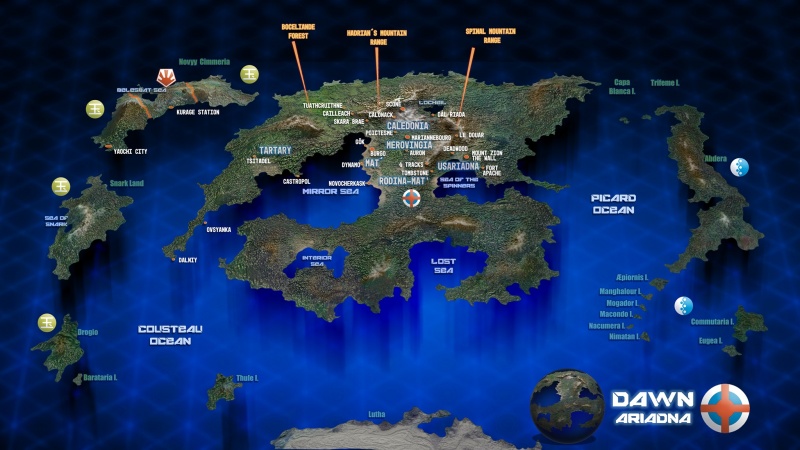 Decades after their satellite network detected something that would disrupt the hard-earned Ariadnan stability. The contact was a PanOceanian scout ship, the POS Nirriti. By a twist of fate, the PanOceanians had located a new wormhole to the Dawn system. In less than two months, the Yujingyu military forward ship Lei Feng followed the steps of the Nirriti. The nearly two centuries-old Ariadnan isolation had come to an end. Ariadna met the rest of Humanity once more. The Ariadnans did not receive their visitors with open arms but instead saw their feelings of abandonment by Earth rekindled. The boldness with which PanOceania and Yu Jing both established their own outposts on the planet did not help ease the tension among Ariadnan leaders.

Centuries after their fateful arrival at Dawn, Ariadnans are still a pioneering people facing a hostile, partly unexplored planet, a people who shed blood for each mile they colonize. The Ariadnan army is a perfect reflection of the character of its peoples and the different regions in which they live. Scouting, forward and infiltration units are the mainstay of their army, busily exploring and claiming new territories. The Ariadnan line infantry has a marked borderland demeanor, earned by generations of keeping the peace against the Antipode threat. Ariadnans more than make up for their technological lag with tenacity and clever use of their planet’s resources: Antipodes, Dog-Warriors and Teseum help level the playfield against more gimmicky adversaries.