Motto of the Tunguska Cheerkillers.

One of the Stadion Tunguska's promotional slogans says that, without its cheerleaders, Aristeia! would be just a game, because they put on the real show. This stadium's men's and women's cheerleading teams are among the best in the entire Sphere and the competition to join them is brutal. But once inside, the bond of sisterhood forged between the members of each group is unbreakable, because, without real teamwork and perfect coordination, the show could not work. And the show that the Stadion Tunguska cheerleaders put on is a great performance that can even make you forget about the Aristeia! the game you were watching. Not for nothing another one of this stadium's slogans is: "There is no halftime at the Stadion Tunguska", because nobody wants to get out of their seat when these cheerleaders jump into the HexaDome. In addition to the perfect physical condition required to join, they also boast their enhancement implants made at Bakunin’s Black Labs, the kind that only Tunguska’s big money can afford and that make them superior to anyone in their league, taking the spectacle to a superhuman level. These ladies and gentlemen have a veritable legion of fans and followers who aspire to be like them.

What few people know is that there was no bigger fan than Anatoly Lavochkin, former owner of the stadium and an important member of the Struktura. It would seem that it was his excessive admiration for the team ladies that brought about the change in the leadership of the Lavochkin organization. When his wife, Ksenia Igorevna, found out that he was using the women's cheerleading team as his private harem, she took it personally and shot her husband in the crotch. Fifteen minutes later, when she deemed he had suffered enough, she put another round in his head, right through his Cube, while her bodyguards eliminated all those who might still be loyal to her late husband. Next, Ksenia Igorevna called a meeting of the organization's board of directors to announce the de facto change of leadership. And so, her first decision as head of the Lavochkin family was to fire the women's cheerleading team and make sure that no one would ever want to hire them.

Hence, overnight, these ladies found themselves on the street, broke, and without prospects, or at least without any desirable ones. Outside the Nomad Nation, few teams would want to hire cheerleaders loaded with illegal implants, and within the Nomad Nation, everyone knew that hiring them meant getting into the Lavochkin's crosshairs, which was obviously a bad idea. But there were a few who were interested in them, such as the Kotelnikov Group: a small gang that had thrived on the human-trafficking business and had customers who were willing to pay good money to have a taste of what the late Anatoly Lavochkin had enjoyed. They started by abducting a couple of them, but they did not factor in the esprit de corps of the cheerleaders, and their "one for all and all for one" attitude. Nor did they take into account the superb physical skills of these ladies, or that some of them came from the slums of Tunguska, or that, after all, they had all been part of a criminal organization and had the ink to prove it. As a result, they stormed into the headquarters of the unwary Kotelnikovs in Lyulka barangay and killed them all on the spot. Once the cries of the last Kotelnikovs died down, those women found themselves surrounded by corpses in a building full of weapons and dirty money, and with a new future opening up to them. So, they took over the Kotelnikovs' protection business in Lyulka and made sure that no human-trafficking network could operate in their barangay. To bring about change, they adopted a fiercely aggressive attitude and kicked the competition out of what was now their barangay. This change was welcomed by the residents of Lyulka who hailed them as their guardian angels.

But in Tunguska, no story has a happy ending. Their actions upset the delicate balance of Tunguska's criminal underworld and were just as criminal as any other, so they became a target for Dragnet, which sent the Grenz Security Team after them. As they are experts at resolving any situation discreetly, the pre-strike report drafted by these operatives reached the inbox of Dragnet Director Nikolai Steranko's comlog. With the veteran eye of a master spy, Steranko was able to realize the potential of this group of ladies, as well as hear the cries of the Black Labs' scientists who were mourning the loss of so much good work that had been done on them. So, the Grenz agents offered them a deal at gunpoint: to carry on with their business, but keeping a lower profile and not bothering the bigger players, and in return, to collaborate with Dragnet in those operations where their unique and spectacular skills were needed. Reluctantly, the Cheerkillers accepted. After all, as they say: "You know you're a Cheerkiller when you have to kick and scream and sweat for everything you want to achieve." And they are ready to do anything to keep their independence and not be anyone's girl because their old team motto is still etched in their minds: "Fly high. Do or die. Dare and triumph. To the Extreme! Always!"

As they say: “You know you’re a Cheerkiller when you have to kick and scream and sweat for everything you want to achieve.” And they are ready to do anything to keep their independence and not be anyone’s girl, because their old team motto is still etched in their minds: “Fly high. Do or die. Dare and triumph. To the Extreme! Always!” 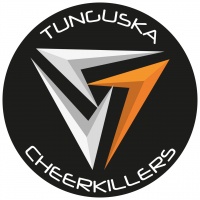 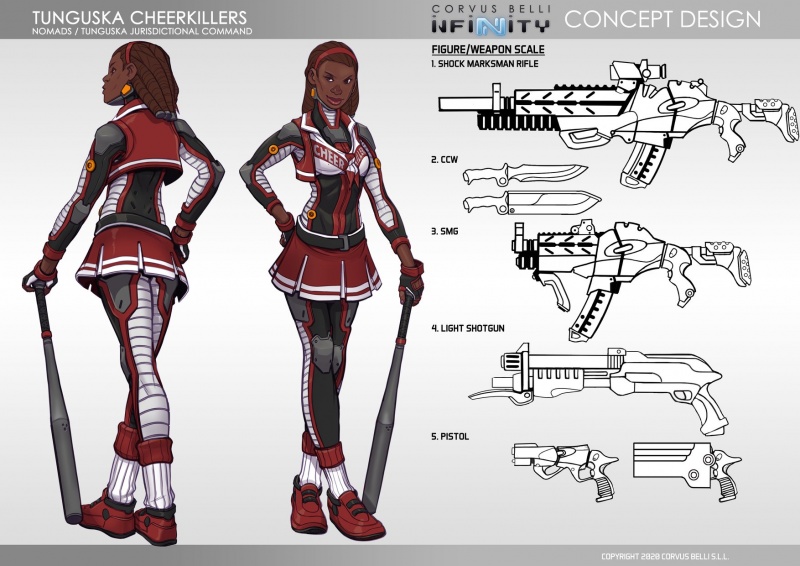 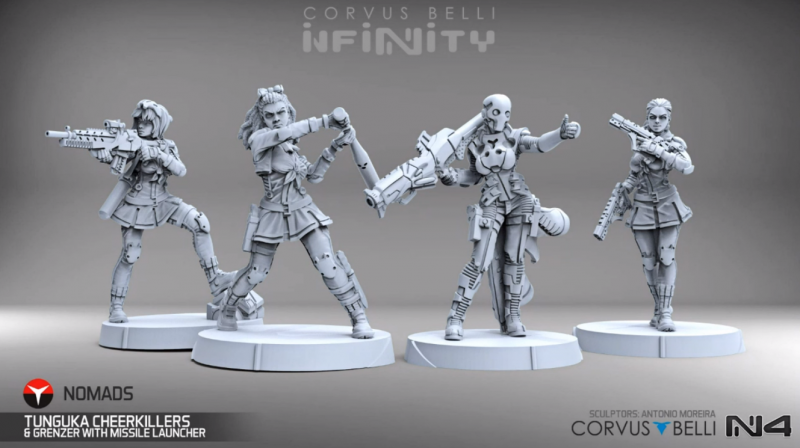 The above render includes a Grenzer with missile launcher.