Ajax (Αἴας in classical Greek) also known as Ajax the Great or Telamonian Ajax, was a legendary hero in Greek mythology. Warrior-King of Salamis and son of Telamon, he took part in the Trojan War and was described by Homer in the Iliad as the tallest of all Achaeans, only bettered in strength and dexterity by his cousin Achilles. Brave and stubborn, he was one of the main Greek captains at the Trojan siege, though not as capable as Achilles or Odysseus. Ajax, pillar of the Achaean army, stands out for being the only hero in the Iliad who never received help from any god.

Notes from Thamyris the Aoidos for the S.S.S. Information Service: “Ajax is the impenetrable wall of the Assault Subsection. He may not be their brightest officer, but he certainly is the toughest. A mountain, a true colossus in battle”.

Contrary to what is usually believed, Ajax the Great, one of the finest heroes of the Myrmidons of the Assault Subsection, is not a Recreation made by ALEPH. Born with the name Glaboros DG-056, this Myrmidon with a peculiar history would earn the nickname of Ajax the Great in combat, with sweat and blood. Mostly blood, and most of it belonging to his enemies.

Glaboros DG-056 was the first success of Project: “Precursor”, although it was only a partial success. “Precursor” was the name for the first phase of Experimental Project: “Warrior” that would culminate in the AR-1 prototype, the fabulous Lhost into which Achilles would be eventually downloaded.

The road to AR-1 was very, very long, with dozens of experimental Lhosts developed in the search for the perfect humanoid T.A.G. The list of obstacles in the development process was never-ending. The power of the articulation’s micro engines had to balance with the structural resilience of the reinforced bones, the weight of the armor and also the extra systems. But hardware is no more than mechanisms… the subtlety, the art, lies in software, in bioware and in wetware. And this is where the failure occurred. The multiplicity of neural links needed to process the information provided by the Glaboros DG-056′s advanced body, caused a sensory overload that broke the delicate balance of its wetware. The result was that the Glaboros had a superb and colossal body, a strong and resilient Lhost, but with a biosynthetic brain unable to achieve its full potential. In this body, Glaboros DG-056 would be an exceptional warrior, but never the tactical genius ALEPH needed. It was obvious that the AI would have to put Glaboros aside and develop a very special Aspect to continue with the “Warrior” Project.

Nevertheless, the investment in Glaboros DG-056 and his body couldn’t be wasted. After all, good old Glaboros was a complete success on the physical plane. He passed through a battery of tests and the knowledge obtained would be invaluable for the future Achilles.

After the testing phase, Glaboros DG-056 was quickly sent to the Paradiso theater of operations, where his legend began to be forged. His imposing height, his colossal strength, and his boldness and eagerness in the face of the enemy turned him into a human battering ram that was unquestioningly followed by all Myrmidons. In the midst of the roar of battle was where Glaboros became a leader, and where the Myrmidons, immersed in Greek culture, gave him the name of Ajax the Great.

Since then, the name of Glaboros DG-056 has been left off official reports, and Ajax is the name the Myrmidons cheer when charging against the enemy. Ajax became a warrior as valuable as he was unexpected, so ALEPH ensured that there is always a “Precursor” body ready for him. Not even the arrival of Achilles, with his charisma and innate leadership, eclipsed Ajax, always able to stand out by himself in the havoc of combat. And any time the Assault Subsection has no need of tactical subtleties and requires violence and brutality applied on the frontline, Ajax the Great is the beast chosen to command the steel tide of his Myrmidons. 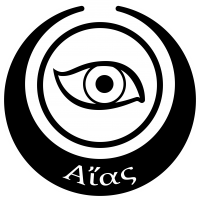 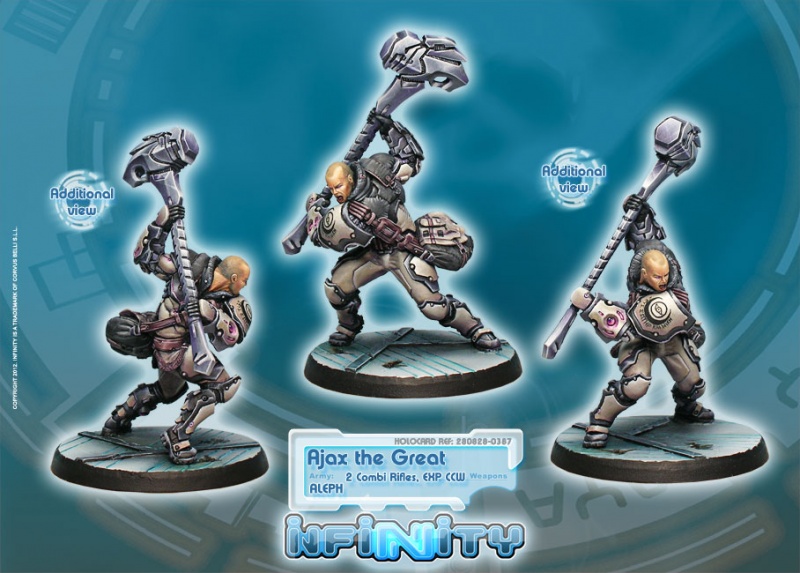 See the Luxumbra page for the 75mm Ajax statue.