Deprecated: The each() function is deprecated. This message will be suppressed on further calls in /home/customer/www/human-sphere.com/public_html/includes/MagicWordArray.php on line 197
 Agnes - Human Sphere

For Agnes, heroes have wings. Whether they were the angels she heard about in Sunday sermons or her mother, Luísa Gerung, who worked as an air ambulance remote pilot for the local emergency services, located in a control booth on the farm of her native Acontecimento. Agnes spent hours watching her mother work and learning from her. By the time she reached adolescence, Agnes already earned some money reprogramming air fumigator remotes for other farmers or modifying them to carry a stun gun for hunting vermin or intruders. She used the money to buy her own air remote to participate in both the legal and illegal races of these flying robots, as well as to cover the weekly donations for the church. It was there, during Sunday homily, where Agnes heard a quote from the encyclical De Lucis Aeternae of pope Calixto IV, which claimed that “to be in the grace of God is the same as a pilot who always flies in friendly skies”. The quote rephrased a repetitive marketing slogan of several airline companies of the time. That phrase would mark her for life. But prayers and donations were not enough for her to enter the Armada flight academy. You need a good student record, something that Agnes lacked after spending so much time in extracurricular activities and illegal racing.

However, the skies were not forever closed for her: ground forces placed fewer curricular requirements to access their atmospheric squadrons, so she enlisted without hesitation. After the instruction period, Agnes asked to be assigned to a conflict zone and was sent to Paradiso, where, in control of the assault air carriers, she remained extremely calm and undaunted under pressure or when confronted with hostile fire. But although she enjoyed her new wings, Agnes wanted to fly beyond the sky to reach the stars. So after two years on the front, she had the opportunity to take a specialization course in the Armada’s transatmospheric flight, which enabled her to pilot shuttles to and from high orbit.

The instructors of the Armada appreciated Agnes’ skills and steady hands, opening her path to the flight academy throughout the staff exchange program. There, among the elitist environment of the officer trainees, her honest and religious character so typical of Acontecimento’s farming areas would stand out “like manure across a ballroom,” in her own words. However, once in flight simulations and in real practice, Agnes’ broad experience would prevail over any protocol issues and would make up for her rather bad grades, allowing her to finally obtain her long-desired officer wings.

After graduating, Agnes was sent to the Acheron Blockade. There, after several combat missions, she proved that her strong character and boldness, so typical of military pilots of the ground forces, had a solid foundation. It’s therefore hardly surprising to find in Agnes’ military record that, in every ship of the Armada she was allocated to, she volunteered herself to pilot shuttles in patrols, in boarding operations, and in tactical extractions and insertions, no matter how risky they were.

But the real turning point in her career would be her outstanding role during the evacuation of the Frusen Bukt port settlement. There, amidst one of the infamous Fimbul storms that sweep Svalarheima and are a deadly trap even for pilots with nerves of steel, Agnes managed four emergency extractions with a shuttle that looked more and more battered with each passing second. This operation would save the lives of hundreds of colonists and open the door for Agnes to the Defiance program, in recognition of her courageous and selfless actions. There is no doubt that when she flies with the wings of the heroes of her childhood, Agnes is afraid of nothing because she can feel Jesus’ hand resting on her shoulder, guiding her trough darkness and enemy fire, however heavy they may be. 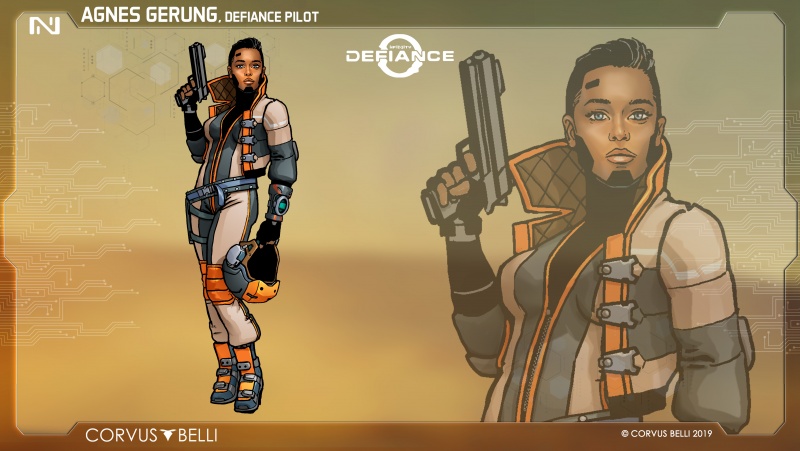 No general release at this time.

None at this time, though her Defiance model is limited to that campaign.