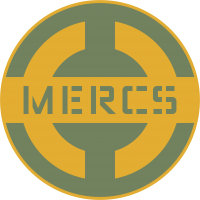 Mercenaries and hired warriors who advertise their services to provide both technical and physical support to anyone wishing to attain some additional force in the Human Sphere. They hold no loyalties and no grudges - they are cold, calculating and precise warriors who are willing to sell their expertise to the highest bidder.

ig companies like StarCo and the Ikari Company dominate public perception of mercenaries, but the War Market swarms with smaller mercenary units. Some of these are long-running organisations with deep operational histories, others are informal groupings based on similar skill sets, and still others form long enough to bid for a single contract and then go their separate ways once the job is done. Mercenary units frequently subcontract out to the major companies. They fill holes in a larger company or regular military’s operational profile, or they provide specialist skills for a specific mission. Usually these agreements are brief, but sometimes mercenary units prove so useful they become semi-permanently or even permanently integrated into command structures. Five significant mercenary units are described below, ranging from the elite Kaplan Tactical Services to the informal network of infowar specialists who call themselves the Wardrivers.