A Dungeon Crawler game by CORVUS BELLI based in the Infinity Universe.

It uses the same dice as Aristeia! and a card-based AI system to control the antagonists.

Defiance is made up of a core set, two big expansions, one boss expansion, and a scenery pack.

A group of heroes has been commissioned up by the human nations to stop an imminent offensive by the Combined Army. Embarked in the Defiance, the heroes of the Human Sphere must fight against an alien invader in a suicide mission with the sole objective of saving humanity.

Infinity Defiance is a dungeon crawler with high quality metal miniatures that are compatible with Infinity. A new cooperative game by Corvus Belli that will debut on Kickstarter in Fall 2019.

The characters of the Defiance, on who’s shoulders rest the fate of the Human Sphere. Named heroes even before they jumped to the far side of the ​Acheron ​wormhole. Are now considered outlawed.

Marked as infected, and compromised by the insidious Shasvastii and their dangerous Specular Killers. However, even when branded as traitors the crew of the Defiance will do their best to survive.

With the help of Ensign Katherine Cho of O-12, who does not believe the official propaganda of her superiors. Also with mercenary operator Raoul Spector, who has previously worked with Katherine while undercover.

Years after returning from the other side of the Wormhole of Acheron and cleaning out their files, the crew members of the Defiance and a motley crew of collaborators – including Kendrat, an impetuous Morat, and Jaan Staar, a Tohaa with unsettling abilities - serve as freelance agents and soldiers of fortune under the banner of their own mercenary company: The Revenant Mobile Intervention Force.

The MIF owes its name to the Revenant, the current moniker for the old and famous space daring vessel - The Defiance, which was the first human ship to ever reach Combined Army space and return to tell the tale.

Having been described as Main Battle Creatures (MBC), Megalodrons are, because of their large size, more common in tactical-superiority scenarios than asymmetric warfare.

Notwithstanding, their thick armor, their unique resistance to damage, and their superior destructive power make them perfect for wiping out enemy resistance in the area of operations as well as their enemies’ morale. This is why Combined Army officers like to have at least one Megalodron in each battle group deployed in a theater of operations.

A Nox Trooper was given away at events to promote Defiance. The model is the same as one of the Nox Troopers included with Defiance. 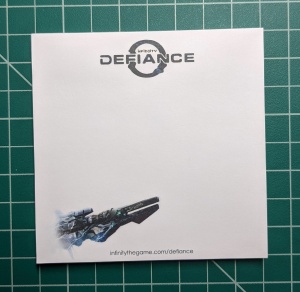 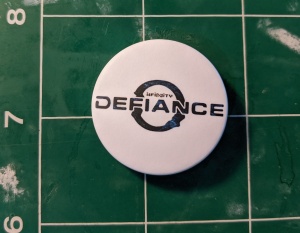 Available as an add-on or in the "All-in" pledge. 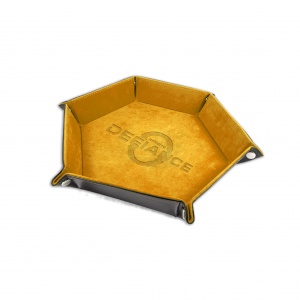