After seeing them in action and witnessing the havoc they wreaked, popping up from nowhere to break the enemy offensive with their deadeye shots, the intelligence service began to call them Hùndùn, the faceless, evil creature from Chinese mythology who embodies chaos and confusion.[1][2]

Freezing cold isn’t the only thing that can kill you on Svalarheima. In addition to this planet’s lethally cold, snow-covered desert, there are a whole series of creatures more than willing to make you their dinner that inhabit it. One of the most frightening you can find inland are the bái fà gorillas (白发 or “white-furred gorillas”).

Although they’re not gorillas in the strict taxonomic sense, they are a type of great ape, but much bigger, more brutal, and more robust than any you can find on old Earth. Bái fà gorillas have two hearts and an incredibly dense and hard cranial dome, a combination that makes them really difficult to kill.

They are terribly territorial and won’t let at any obstacle impede their search for food, be it any physical barrier, any creature, or any person. Considered the apex predator in the Huangdi region, in the words of the Yujingyu settlers themselves, “they are the protagonists in the stories the Yeti tells to scare its children.” However, this joke only helps to hide a very real fear: numerous settlements in isolated areas have been attacked by bands of man-eating bái fà gorillas, resulting in terrible carnage. After the first raids, the settlers organized themselves to fight off this threat.

As the Party’s colonial relocation policy was not without wisdom, many of these settlers had emigrated from mountainous areas in China and, at the Zhenxin settlement in the Báidàng region, many of them still remembered the traditional hunting techniques they used in places similar to Huangdi. Thus, a hunters’ guild was established in this town, which developed special techniques that allowed them to keep the bái fà gorillas at bay, even if they had to pay a high price in human blood. These techniques were imbued with superstitions that helped strengthen the mettle of the hunters, who would have to face creatures with almost mythical powers. So, the hunters from Zhenxin learned to become practically invisible and hide on the desolate plains of Huangdi to ambush these predators.

When hunting them, it’s essential that the hunter covers his face completely so that the bái fà gorilla can’t recognize him, because if it survives, which is highly possible given their strong constitution, this creature will not stop until it kills the hunter and his whole family. This superstition should not be taken lightly, for it has a real basis. Bái fà gorillas are well-known for their prodigious memories and for their no less prodigious vengefulness, as they are able to recognize anyone who may have attempted to cause them harm even after many years.

By passing on these techniques from father to son, the secrets of Zhenxin’s hunters would have been kept within the guild, but they were destined for something greater. The day one of these invisible hunters from Zhenxin saved General Hang Zheng’s life, whose vehicle was attacked by a band of bái fà gorillas while crossing the Báidàng region, was the moment when the guild really entered the StateEmpire’s history books.

Impressed by their skills, the general ordered the creation of a special training center in Zhenxin, where the StateEmpire’s troops would learn these techniques for the benefit of Yu Jing. However, this isn’t a typical military facility. As part of the guild’s agreement with General Hang Zheng, each cadet is hosted by a hunter who will teach them their techniques and the associated superstitions as if they were true guild apprentices. Therefore, the members of this unit are all true bái fà gorilla hunters, who keep these superstitions in combat, even when far from Zhenxin. For this reason, they always cover their faces when on the ground and they never carry any personal identification, a peculiarity that earned them a reputation within the StateEmpire Army.

After seeing them in action and witnessing the havoc they wreaked, popping up from nowhere to break the enemy offensive with their deadeye shots, the intelligence service began to call them Hùndùn, the faceless, evil creature from Chinese mythology who embodies chaos and confusion. This is the legacy of Zhanxin’s faceless hunters, who sow absolute mayhem among the enemy, be it a herd of bái fà gorillas or any other foe who dares to challenge Yu Jing.[3] 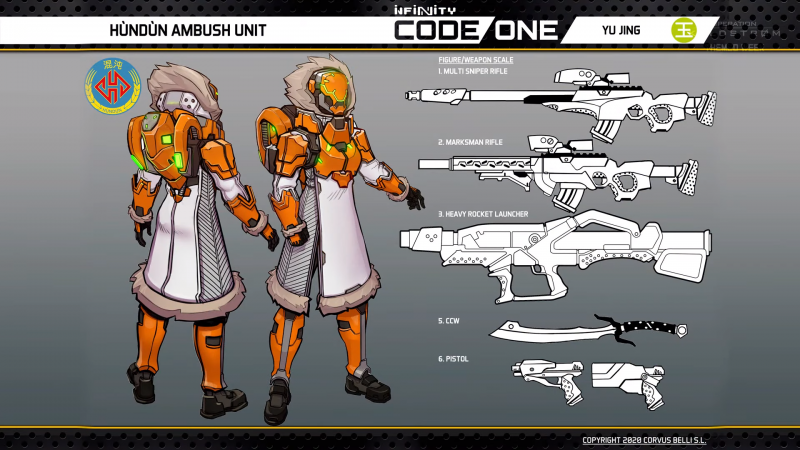 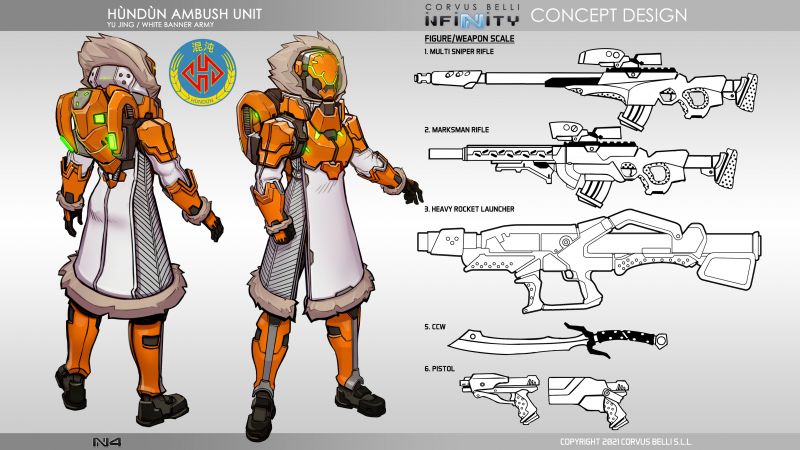 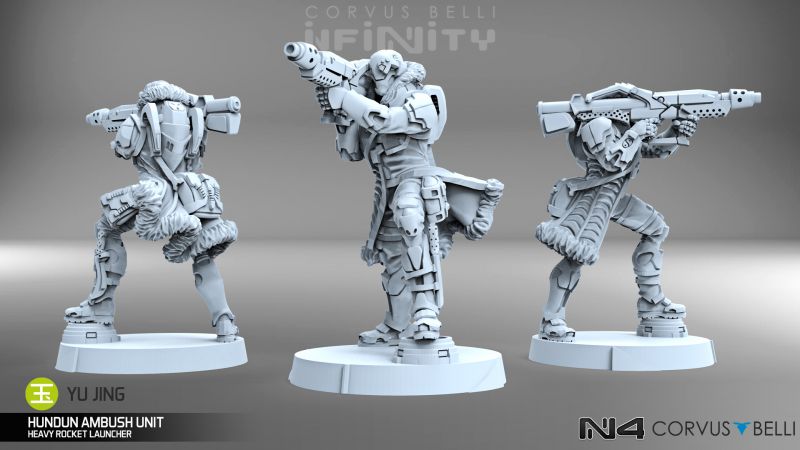 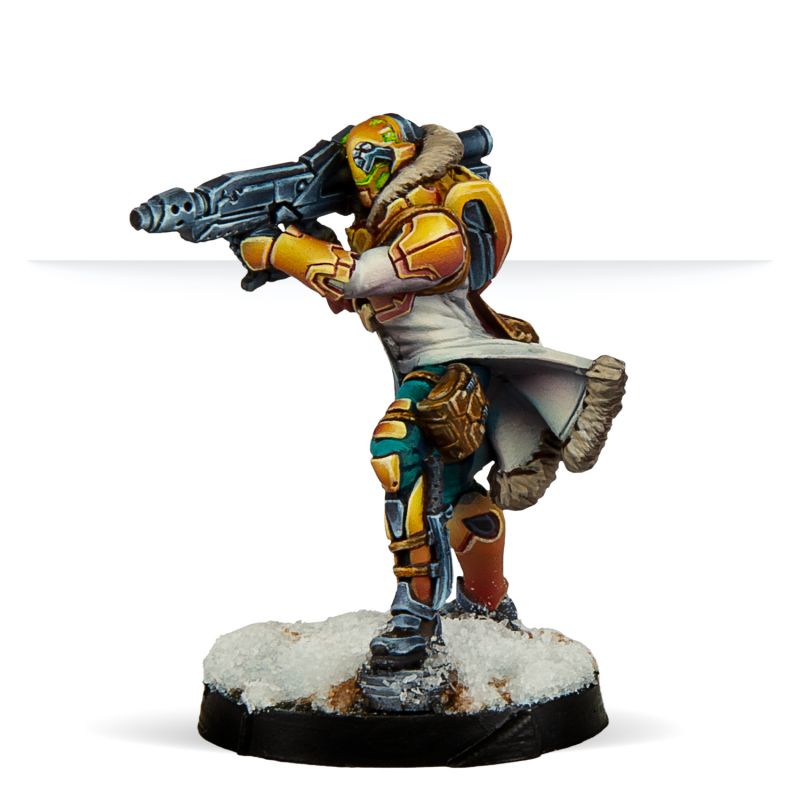 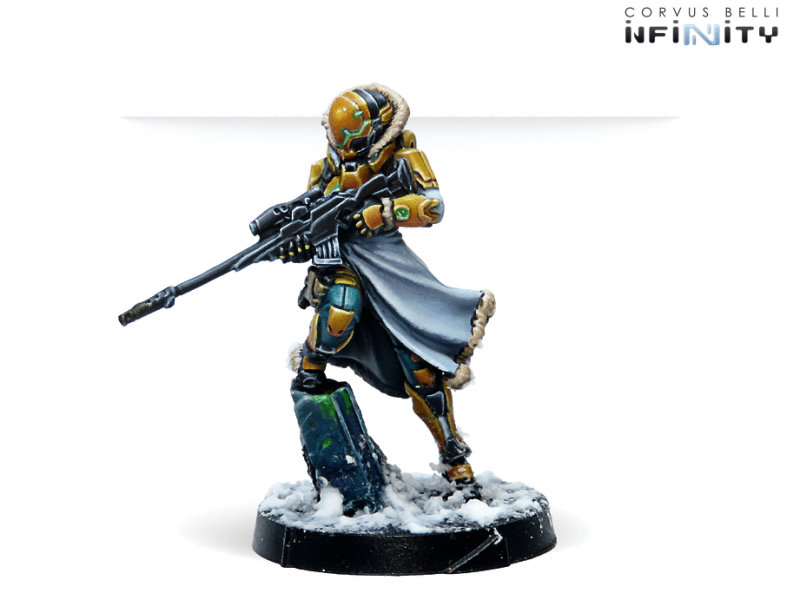