We are going through some dark times, and both the Human Sphere and the Church need an entire army of volunteers, not to invite hatred or violence, but to bring peace and justice, to defend the helpless and the abused. And these volunteers can be none other than true Christians, those who manifest their faith in every single action of their lives, those who heed the Church's call to mission and crusade, those who are willing to join the ranks of the Crosiers. The Coadjutor Crosiers are secular soldiers who bear the symbol of the cross both on their uniforms and in their souls, because the fact that they are not clergy does not mean that they are not religious or part of the Church—quite the contrary. For Crosiers, to be a true Christian means to live out a commitment. For these troopers, faith equals commitment, and Christian commitment is in fact the defense and protection of those in need and those who are powerless. This is why, in an age where enemies loom large, it has never been more vital for true Christians to take action.

Aware of this pressing need, the Church has called upon the faithful and has provided the means so that the members of the community who have answered this call can become not only a shield, but also an instrument of change in favor of a Sphere governed by the true principles of NeoVatican Christianity. Thus, training centers sponsored by the Church, but attached to the PanOceanian Military Complex, train the believers to become Coadjutors, contributors to God's plan as soldiers of Christ. They then become bearers of the cross, the symbol of the faithful, which they hoist like a torch, a beacon of hope for all those who need their protection. There will be no danger or threat that the Crosiers cannot face, because their commitment to PanOceania and to the Church is born of the strongest and firmest conviction that can exist: the knowledge that what they are doing is right as well as necessary, because they are carrying out God's plan, a plan that cannot be delayed or hindered, so woe betide those who stand in their way! 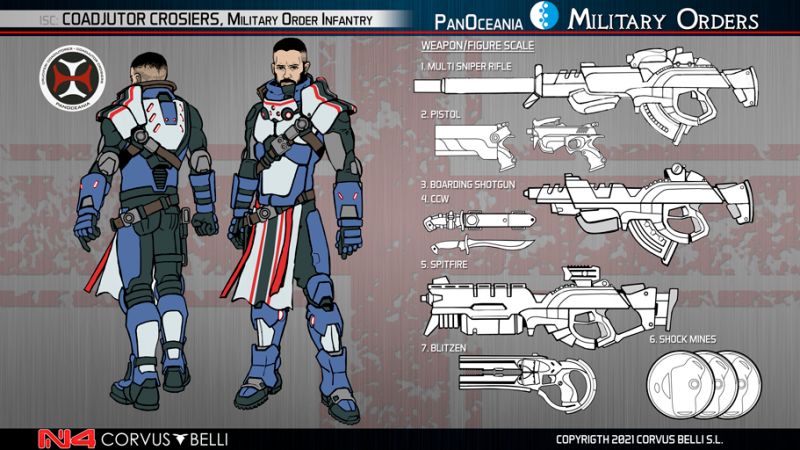